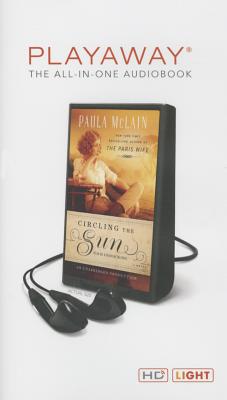 By Paula McLain
$88.79
Hard to find: allow 24 hours for information

This is the story of a woman who is strong and fiercely independent, well ahead of her times. As a young child, she is abandoned by her mother and raised on a horse farm by her father and the native tribe in 1920s British colonial East Africa. She grows up with an empowering belief in her ability to survive.  She blazes her own path from an early age with triumphs, scandals,  love and heartache.  This story is based on the life of Beryl Markham, a ground breaking horse trainer and aviatrix and a fascinating woman.

Paula McLain does an exceptional job of capturing Beryl Markham and her singular life, as well as painting a vivid portrait of Kenya and a host of other noteworthy characters, including Karen Blixen, Dennys Finch-Hatton and the two British princes, Harry and David. I've been a fan of Beryl Markham's since reading her memoir, West With the Night, in the '80s, and have also read whatever I could about her. This is a beautifully written, authentic novel of the acclaimed horse trainer, pioneer aviator, and gifted writer, about whom Hemingway famously wrote ”She can write rings around all of us who consider ourselves as writers . . . It is really a bloody wonderful book.”

“Reading Circling the Sun reminded me of the deep pleasure of solid storytelling: the vast landscape of colonial Kenya, complicated and compelling historical characters, love, suffering, and adventure combine to create a captivating narrative. McLain imagines the African childhood and early adulthood of real-life horse trainer and pioneering female aviator, Beryl Markham, as well as her social milieu which included Denys Finch Hatton and Karen Blixen, who, as Isak Dinesen, wrote Out of Africa. Markham lived a fascinating and uncompromising life filled with danger, ill-fated romance, and stunning bravery, and McLain does justice to her memory with this sensitive and beautifully written portrayal.”
— Rhianna Walton (W), Powell's Books, Inc, Portland, OR