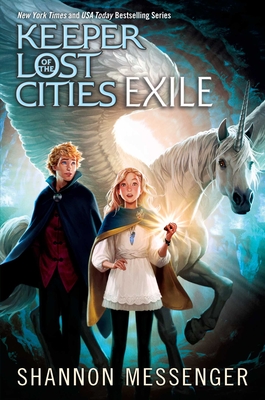 By Shannon Messenger
$9.99
On our shelves now

Sophie befriends the mythical Alicorn and puts her mysterious powers to the test in this enchanting second book in the Keeper of the Lost Cities series.

Sophie is settling in nicely to her new home and her new life in the world of the lost cities. And it helps that living at Havenfield means getting to spend time with rare, precious species—including the first female Alicorn, who shows herself to Sophie and trusts no one but her.

Sophie is tasked with helping to train the magical creature so that the Alicorn can be revealed to the people of the lost cities as a sign of hope, and Sophie wants to believe that the recent drama and anguish is gone for good.

But the secrets buried deep in Sophie’s memories remain, and before long before she’s back in incredible danger, risking everything to find the answers to questions that could save not only her life, but the life of someone close to her…

Shannon Messenger graduated from the USC School of Cinematic Arts, where she learned—among other things—that she liked watching movies much better than making them. She’s studied art, screenwriting, and film production, but she realized her real passion was writing stories for children. She’s the New York Times and USA TODAY bestselling author of the award-winning middle grade series, Keeper of the Lost Cities, as well as the Sky Fall series for young adults. Her books have been featured on multiple state reading lists, published in numerous countries, and translated into many different languages. She lives in Southern California with an embarrassing number of cats. Find her online at ShannonMessenger.com.