Hunt for the Skinwalker: Science Confronts the Unexplained at a Remote Ranch in Utah (Paperback) 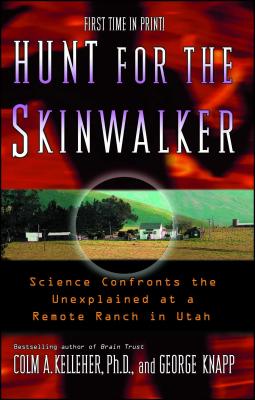 The author of the controversial bestseller Brain Trust brings his scientific expertise to the chilling true story of unexplained phenomena on Utah's Skinwalker Ranch -- and challenges us with a new vision of reality.

For more than fifty years, the bizarre events at a remote Utah ranch have ranged from the perplexing to the wholly terrifying. Vanishing and mutilated cattle. Unidentified Flying Objects. The appearance of huge, otherworldly creatures. Invisible objects emitting magnetic fields with the power to spark a cattle stampede. Flying orbs of light with dazzling maneuverability and lethal consequences. For one family, life on the Skinwalker Ranch had become a life under siege by an unknown enemy or enemies. Nothing else could explain the horrors that surrounded them -- perhaps science could.

Leading a first-class team of research scientists on a disturbing odyssey into the unknown, Colm Kelleher spent hundreds of days and nights on the Skinwalker property and experienced firsthand many of its haunting mysteries. With investigative reporter George Knapp -- the only journalist allowed to witness and document the team's work -- Kelleher chronicles in superb detail the spectacular happenings the team observed personally, and the theories of modern physics behind the phenomena. Far from the coldly detached findings one might expect, their conclusions are utterly hair-raising in their implications. Opening a door to the unseen world around us, Hunt for the Skinwalker is a clarion call to expand our vision far beyond what we know.

Colm A. Kelleher, Ph.D., is a biochemist with a fifteen-year research career in cell and molecular biology. Following his Ph.D. in biochemistry from the University of Dublin, Trinity College in 1983, Kelleher worked at the Ontario Cancer Institute, the Terry Fox Cancer Research Laboratory, and the National Jewish Center for Immunology and Respiratory Medicine. For the past eight years he has worked as project manager and team leader at a private research institute, using forensic science methodology to unravel scientific anomalies.

George Knapp is Nevada's best-known journalist. For 20-plus years, he has served as anchor, chief investigative reporter, and commentator for KLAS TV, the CBS affiliate in Las Vegas. He is a six-time Emmy winner, has earned the AP's Mark Twain award for news writing seven times, and twice was given the Edward R. Murrow award for Investigative Reporting. His reporting on Nevada's infamous Area 51 military base was selected by UPI as Best Individual Achievement by a Reporter in 1989. He also writes an award-winning weekly column for a Las Vegas newspaper.