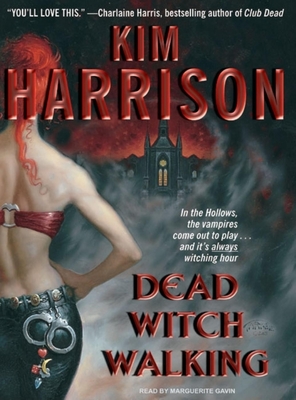 By Kim Harrison, Marguerite Gavin (Narrated by)
$29.99
Email or call for price.

This is book number 1 in the Hollows (Blackstone Audio) series.

Rachel Morgan is a runner with the Inderland Runner Services, apprehending law-breakers throughout Cincinnati. She's also a witch, one of the many Inderlanders who revealed themselves after a genetically engineered virus wiped out 50 percent of humanity. Witches, warlocks, vampires, werewolves the creatures of dreams and nightmares have lived beside humans for centuries, hiding their powers. But now they've stopped hiding, and nothing will be the same. On the run with a contract on her head, Rachel reluctantly teams up with Ivy, Inderland's best runner and a living vampire. But this witch is way out of her league, and to clear her name, Rachel must evade shape-changing assassins, outwit a powerful businessman/crimelord, and survive a vicious underground fight-to-the-death not to mention her own roommate Fun, sassy, filled with action, humor, and romance, Dead Witch Walking is the perfect summer listen for anyone who likes vampires, paranormal fantasy, romance, or just a great beach book.

Kim Harrison is the "New York Times" bestselling author of "Dead Witch Walking"; "The Good, the Bad, and the Undead"; and "A Fistful of Charms."

Marguerite Gavin has recorded over three hundred audiobooks in nearly every genre. A nominee for the prestigious Audie Award, she was won both "AudioFile" Earphones and "Publishers Weekly" Listen-Up Awards. "AudioFile" magazine says "Marguerite Gavin . . . has a sonorous voice, rich and full of emotion."