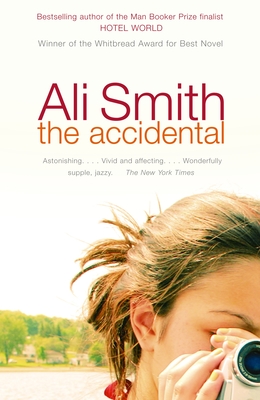 By Ali Smith
$15.00
Available from warehouse in 1-5 business days

Filled with Ali Smith's trademark wordplay and inventive storytelling, here is the dizzyingly entertaining, wickedly humorous story of a mysterious stranger whose sudden appearance during a family’s summer holiday transforms four variously unhappy people. Each of the Smarts—parents Eve and Michael, son Magnus, and the youngest, daughter Astrid—encounter Amber in his or her own solipsistic way, but somehow her presence allows them to see their lives (and their life together) in a new light. Smith’s narrative freedom and exhilarating facility with language propel the novel to its startling, wonderfully enigmatic conclusion.

Ali Smith is the author of many works of fiction, including the novel Hotel World, which was short-listed for both the Orange Prize and the Booker Prize and won the Encore Award and the Scottish Arts Council Book of the Year Award, and The Accidental, which won the Whitbread Award and was short-listed for the Man Booker Prize and the Orange Prize. Her most recent novel, How to be both, was a Man Booker Prize finalist and winner of the Bailey Women’s Prize for Fiction, the Goldsmiths Prize, the Costa Novel Award, and the Saltire Literary Book of the Year Award. Born in Inverness, Scotland, Smith lives in Cambridge, England.

“Beautifully executed. . . . A few pages [in] and you begin to remember how much fun it is to put yourself in the hands of a skilled, majestically confident writer. . . . Delightful.”

“Brims with wit, humor, and energy.” —The Christian Science Monitor