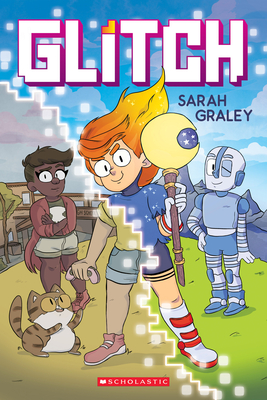 Imagine being sucked into your new video game, and you have to save that virtual world while also juggling middle school! Sarah Graley’s hilarious graphic novel is a fun romp through the pixel world of Dungeon City, and a great take on the recent trend of video game books.

From comics rising star Sarah Graley, a fresh and funny middle-grade graphic novel featuring a girl who must save a virtual world... and her own!
Izzy has an incredible secret -- she can enter the world of her new video game! She meets Rae, a robot who says Izzy is destined to save Dungeon City from the Big Boss. How is this possible?! And how can she fight for this virtual world when she's got a whole real life to keep up with: her family (though she could do without her mom's annoying cat), and her best friend, Eric. Things get even weirder when Izzy loses a life while inside the game, and she starts to worry about what might happen if she gets a Game Over for good. Meanwhile, Eric has been super upset with Izzy since she's been keeping secrets and bailing on their plans. Can Izzy survive Dungeon City and save their friendship?

Sarah Graley is a cartoonist who lives in Birmingham, UK, with four cats and her partner, Stef! She’s the creator of books like Glitch, Kim Reaper, and her long-running diary comic Our Super Adventure. She was the artist on the first official Minecraft graphic novel, and the writer and artist on the Diamond Gem Award-nominated Rick and Morty comics miniseries Lil’ Poopy Superstar. Visit Sarah online at sarahgraley.com.

"Sarah Graley is a formidable talent. She has an enormously deft hand at comedic timing, expression, and color." -- Kate Beaton, #1 New York Times bestselling author of Hark! A Vagrant

"The bright, rich color palette matches the upbeat and zany personality of the characters, game world, and conflict." -- Kirkus Reviews

"The story's greatest strength is Graley's strong sense of humor, as Izzy's hilarious commentary on everything from her parents to video-game culture is spot-on and delightful. An epic win." -- Booklist

Praise for Donut the Destroyer:

"A strong role model who has the self-confidence to change tracks despite her friends and family's expectations, Donut will readily endear herself to readers." -- School Library Journal

"This graphic novel is full of school drama, friendship, and epic battles of good and evil... A sweet fish-out-of-water, new-school romp." -- The Bulletin of the Center for Children's Books

"Graley's artwork is immediately disarming, setting the tone with all the comfort and character of a Matt Groening cartoon -- and the humor, too." -- Booklist