Be My Baby: A Memoir (Hardcover) 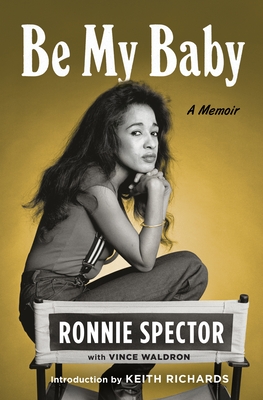 By Ronnie Spector, Vince Waldron (With), Keith Richards (Foreword by)
$27.99

“Do I have to tell you that Ronnie’s got one of the greatest female rock-and-roll voices of all time? She stands alone.”
—Keith Richards

Be My Baby is the behind-the-scenes story—newly updated, and with an especially timely message—of how the original bad girl of rock and roll, Ronnie Spector, survived marriage to a monster and carved out a space for herself amid the chaos of the 1960s music scene and beyond.

Ronnie’s first collaboration with producer Phil Spector, “Be My Baby,” shot Ronnie and the Ronettes to stardom. No one sounded like Ronnie, with her alluring blend of innocence and knowing, but her voice would soon be silenced as Spector sequestered her behind electric gates, guard dogs, and barbed wire.

It took everything Ronnie had to escape her prisonlike marriage and wrest back control of her life, her music, and her legacy. And as shown in this edition, which includes a 2021 postscript from Ronnie, her life became proof that our challenges do not define us and there is always the potential to forge a fuller life.

In Be My Baby, the incomparable Ronnie Spector offered a whirlwind account of the ever-shifting path of an iconic artist. And, more than anything else, she gave us an inspiring tale of triumph.

Ronnie Spector shot to fame in 1963 as the lead singer of the Ronettes, the quintessential girl group responsible for bringing a streetwise style to rock music and for a string of hits that included “Be My Baby.” Inducted into the Rock and Roll Hall of Fame in 2007, Ronnie Spector and her iconic look and sound have inspired new generations of female artists, including Amy Winehouse. She toured the world throughout the six decades of her extraordinary career. Ronnie Spector died on January 12, 2022.

Vince Waldron is an author and Emmy-winning writer. He lives in Los Angeles.

“What a trip it was, being Miss Ronnie Spector. And what a perfect, challenging moment in our culture to revisit—and revel in—this edge-of-your-seat tutorial from the ultimate Cool Girl on surviving her tumultuous rock opera with joy and talent intact. These pages are laced with pure, straight-up Ronnie—hilariously deadpan about her astonishing life, fierce, clear-eyed, and still mad for the music. Dive in and fall in l-o-v-e.”
—Gerri Hirshey, author of We Gotta Get Out of This Place: The True, Tough Story of Women in Rock

“As a reading experience it certainly hits the high notes . . . It's candid stuff, and readers will be enthralled by it all.”
—Christopher Osterberg, Budapest Times

“Entertaining, often disturbing . . . well told and . . . quite moving. Be My Baby . . . marks the passage of Ronnie Spector from victim to survivor.”
—Alan Light, Rolling Stone

“If you’re looking for self-pity, you’ll be disappointed, because her book, like her voice, is full of cocky, smart, self-aware humor. And, yes, in case you were wondering, it totally sucked to be married to Phil Spector.”
—Rob Sheffield, Rolling Stone

“Arguably one of the most potent voices of rock 'n' roll’s early moments, Ronnie Spector was the lynchpin of The Ronettes and the ultimate 1960s powerhouse performer. . . . She is strong, bolshy and sharp as a tack.”
—Far Out (UK)

“Not only does this book give a revealing look at what it takes to be in one of the greatest girl groups of all time, it also casts a sinister light on Ronnie’s former husband and Wall of Sound svengali, Phil Spector.”
—Emily Barker, NME

“Despite all the hard times, Ronnie comes across here as a survivor, and the book maintains a surprisingly jaunty tone.”
—Ilene Cooper, Booklist

“A lively, illuminating read . . . Spector’s portrait of the energy of the early Sixties music scene is fascinating.”
—Kirkus Reviews