The Hunting of Hillary: The Forty-Year Campaign to Destroy Hillary Clinton (CD-Audio) 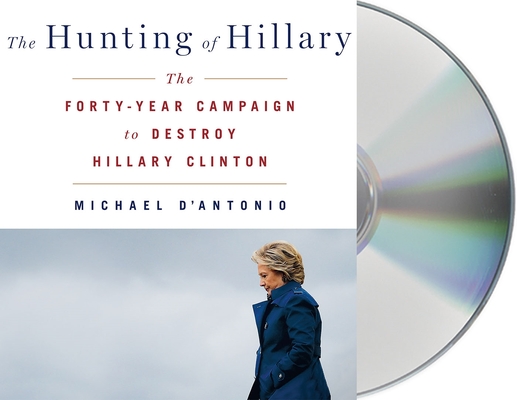 The Hunting of Hillary traces how an entire industry of hate, lies, and fear was created to persecute Hillary Clinton for decades and profit from it.

In The Hunting of Hillary, presidential biographer Michael D’Antonio details the years of lies and insults heaped upon Hillary Clinton as she pursued a life devoted to politics and policy. The worst took the form of sexism and misogyny, much of it barely disguised.

A pioneer for women, Clinton was burdened in ways no man ever was. Defined by a right-wing conspiracy, she couldn’t declare what was happening lest she be cast as weak and whiny. Nevertheless, she persisted and wouldn't let them define her. As The Hunting of Hillary makes clear, her achievements have been all the more remarkable for the unique opposition she encountered. The 2016 presidential election can only be understood in the context of the primal and primitive response of those who just couldn’t imagine that a woman might lead.

For those who seek to understand the experience of the most accomplished woman in American politics, The Hunting of Hillary offers insight. For those who recognized what happened to her, it offers affirmation. And for those who hope to carry Clinton’s work into the future, it offers inspiration and instruction.

As part of a team of journalists from Newsday, MICHAEL D'ANTONIO won the Pulitzer Prize for his reporting before going on to write many acclaimed books, including Atomic Harvest, The State Boys Rebellion, and The Truth About Trump. He has also written for Esquire, The New York Times Magazine, and Sports Illustrated. He lives in New York.