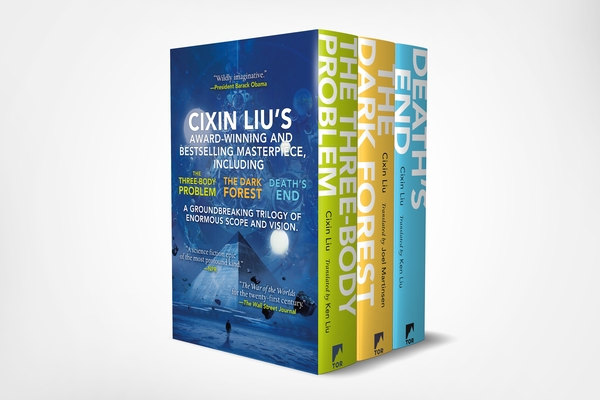 Soon to be a Netflix Original Series!

A secret military group sends signals into space in hopes of establishing contact with aliens -- and succeeds.

Picking up their signal is an alien civilization on the brink of destruction who now readies to invade Earth.

News of the coming invasion divides humanity like never before. Some want to help the superior beings take over a world they see as corrupt. Others prepare to fight the invasion at all cost.

The Three Body Problem trilogy is a ground-breaking saga of enormous scope and vision.

“The War of the Worlds for the twenty-first century . . . Packed with a sense of wonder.”
—The Wall Street Journal

“A meditation on technology, progress, morality, extinction, and knowledge that doubles as a cosmos- in-the-balance thriller.” —NPR

CIXIN LIU is the most prolific and popular science fiction writer in the People’s Republic of China. Liu is an eight-time winner of the Galaxy Award (the Chinese Hugo) and a winner of the Chinese Nebula Award. Prior to becoming a writer, he worked as an engineer in a power plant. His novels include The Three-Body Problem, The Dark Forest, and Death's End.

Ken Liu is an award-winning author of speculative fiction. His books include the Dandelion Dynasty series (The Grace of Kings), The Paper Menagerie and Other Stories, The Hidden Girl and Other Stories, and the Star Wars tie-in novel, The Legends of Luke Skywalker. He frequently speaks at conferences and universities on topics like futurism, cryptocurrency, the mathematics of origami, and more. He lives near Boston with his family.