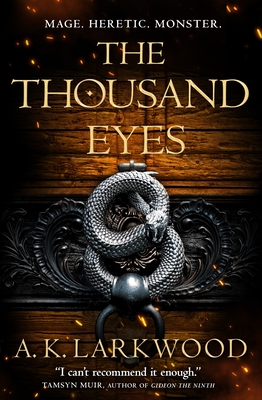 This is book number 2 in the The Serpent Gates series.

Just when they thought they were out...

Two years after defying the wizard Belthandros Sethennai and escaping into the great unknown, Csorwe and Shuthmili have made a new life for themselves, hunting for secrets among the ruins of an ancient snake empire.

Along for the ride is Tal Charossa, determined to leave the humiliation and heartbreak of his hometown far behind him, even if it means enduring the company of his old rival and her insufferable girlfriend.

All three of them would be quite happy never to see Sethennai again. But when a routine expedition goes off the rails and a terrifying imperial relic awakens, they find that a common enemy may be all it takes to bring them back into his orbit.

A.K. LARKWOOD studied English at St John’s College, Cambridge, and now lives in Oxford with her wife and a cat. The Unspoken Name is her debut novel.

Praise for The Unspoken Name:

“Astounding... written with skill and stunning assurance. The worlds this story spans are as exotic and dangerous as the characters who traverse them. From its flawless first page to its bittersweet last, The Unspoken Name is unlike anything I’ve read before.” —Nicholas Eames, author of Kings of the Wyld

“What a glorious book! Richly detailed, enthralling, and extraordinary, with brilliant nods to such luminaries as Ursula K. Le Guin and Diana Wynne Jones. A.K. Larkwood's book hooked me in from the first page and never let go. Fabulous, in every meaning of the word." —Jenn Lyons, author of Ruin of Kings

"A.K. Larkwood's The Unspoken Name is an epic fantasy in the vein of Le Guin's magnificent Tombs of Atuan — if Arha the Eaten One got to grow up to be a swordswoman mercenary in thrall to her dubious wizard mentor. The action is fast-paced and emotionally compelling; the magic is dangerous, beautiful, and utterly compromising. I love this book so much." —Arkady Martine, author of A Memory Called Empire

"An unexpected and new take on classic orcs 'n' swords fantasy. Stylish, classy, and timeless - but with racing stripes and an inbuilt camera. I cannot recommend it enough." —Tamsyn Muir, author of Gideon the Ninth

"Takes all the tropes of fantasy--orcs and epic quests, dead gods and undead souls, daring rescues and last-second escapes--and spins them into something wild and new. A dizzy, delicious debut."--Alix E. Harrow, Nebula and Hugo finalist and author of The Ten Thousand Doors of January

“Quick-paced, occasionally brutal, and genuinely funny, Larkwood’s debut novel turns standard fantasy tropes on their head with grace and humour. Csorwe might have the tusks of an orc, but she is human to her core. Readers will be rooting for her to receive the happy ending that she obviously deserves.”—Kerstin Hall, author of The Border Keeper

"The Unspoken Name has everything - spine-tingling prose, gorgeous worldbuilding, powerful older women, found family (but it's terrible), and true love. It's fantastic. I read it in one sitting." —Emily Tesh, author of Silver in the Wood

"Larkwood's debut is a fresh, fun take on the genre, packed with smart prose, badass characters, and fantastic worldbuilding. A necessary addition for any fantasy lover's collection." -- Tara Sim, author of Scavenge the Stars

"A breathtaking journey. It's epic fantasy with both creeping, omnipresent horrors and yet a tenacious, delicate warmth." —K. A. Doore, author of The Perfect Assassin