Blue Blood II: Duke-Carolina: The Latest on the Never-Ending and Greatest Rivalry in College Hoops (Hardcover) 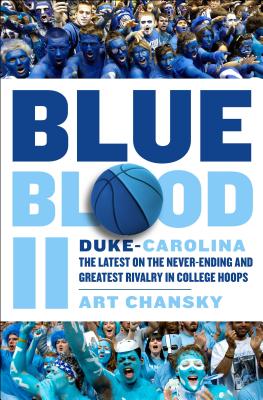 When Art Chansky's Blue Blood was published in 2005, ESPN’s Dick Vitale said it was about “the greatest rivalry, not just in college basketball, but in all of sports” and the book was hailed by The East Carolinan as the “holy text for both sides of the rivalry.” Now, 13 years later, Chansky revisits the fiercest college basketball rivalry.

Since 2005, Duke-Carolina has been a study of rival recruiting philosophies, disparate playing styles, classic game encounters, coaching milestones, All-American and NBA draft draft picks galore, plus off -the-court drama, and most recently, the ultimate question of who will be the next caretakers to this national treasure.

Winning more Atlantic Coast Conference and NCAA championships than the rest of the ACC combined made Duke and UNC the true blue bloods of basketball. When the prequel to this book was published in 2005, few fans thought the passionate backyard battle could get any better, but the last 13 years have added new colors and different fabrics to the mosaic that is the remaining virtue of the college game’s regular season, which for everyone else is now a qualifying run to the NCAA tournament and March Madness.

Chansky brings all of these details to light, making Blue Blood II a must-have follow-up for Duke and UNC fans, and college basketball fans in general.

Art Chansky is an author and sportswriter who has covered basketball on Tobacco Road for more than thirty years. By day, he is a sports marketing executive who developed an all-sports competition between Duke and Carolina called the Carlyle Cup. He has written The Dean’s List: a Celebration of Tar Heel Basketball and Dean Smith and Dean’s Domain: The Inside Story of Dean Smith and His College Basketball Empire on North Carolina basketball and coach Dean Smith. He lives with his family on the “Duke side” of Chapel Hill.

"[Chansky's] apparent love of the game and thorough, lively narrative make this a strong choice for all sports collections. This new volume is indispensable for fans of the Duke Blue Devils and North Carolina Tar Heels, and an absorbing read for all college basketball fans." —Library Journal

"Not only does Chansky tell the whole story — not shying away from controversies that have arisen since 2005, such as NCAA investigations in Chapel Hill — he precedes each chapter with collections of interesting stats and notes that perfectly lead into the pages of text.... So, any followers of the Battle of the Blues, no matter which side they are on or in which generation they fall, should pick up their copy of Blue Blood II before the season starts and just enjoy the ride that Chansky — a UNC graduate and former editor of The Daily Tar Heel — takes his readers on." —Ball Durham

Praise for Blue Blood:
"Blue Blood will be inhaled by all who pick it up." —Curry Kirkpatrick, ESPN

"An informative, intelligent history that will entertain even those college basketball fans who can't stand eitherschool." —Booklist

"A book on this rivalry was long overdue, and Chansky does it justice. This is sure to become a staple of every Tar Heel or Blue Devil fan's library." —InsideCarolina.com