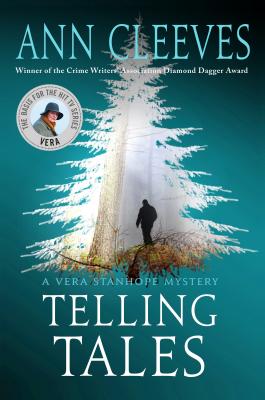 By Ann Cleeves
Email or call for price
Hard to find: allow 24 hours for information

This is book number 2 in the Vera Stanhope series.

From Ann Cleeves—New York Times bestselling and award-winning author of the Vera and Shetland series, both of which are hit TV shows—comes Telling Tales.

“Ann Cleeves is one of my favorite mystery writers.”—Louise Penny

It has been ten years since Jeanie Long was charged with the murder of fifteen-year-old Abigail Mantel. Now residents of the East Yorkshire village of Elvet are disturbed to hear of new evidence proving Jeanie’s innocence. Abigail’s killer is still at large.

For one young woman, Emma Bennett, the revelation brings back haunting memories of her vibrant best friend--and of that fearful winter’s day when she had discovered her body lying cold in a ditch.

As Inspector Vera Stanhope makes fresh enquiries on the peninsula and villagers are hauled back to a time they hoped to forget, tensions begin to mount. But are people afraid of the killer or of their own guilty pasts?
With each person’s story revisited, the Inspector begins to suspect that some deadly secrets are threatening to unfurl…

“Nothing short of riveting." --Louise Penny

"Creates a dark enough mood to keep you straining to see what will come to light next." --People

“Cleeves offers up evocative settings and flawed characters with depth, making her mysteries wonderfully addictive. Her latest is no exception.” —Library Journal (starred)

"I didn't expect the final reveal. Those cleverly disguised dead ends had me completely fooled, which is just the way I like it. But I was sorry to say goodbye."—Crime Fiction Lover

"Ann Cleeves is a skillful technician, keeping our interest alive and building slowly up to the denouement. Her easy use of language and clever story construction make her one of the best natural writers of detective fiction." —Sunday Express (UK)

If you're a fan of Frances Fyfield, Minette Walters, or Val McDermid, get to know Cleeves. —Globe and Mail (Canada)

"It's a dark, interesting novel with considerable emotional force behind it." --The Spectator