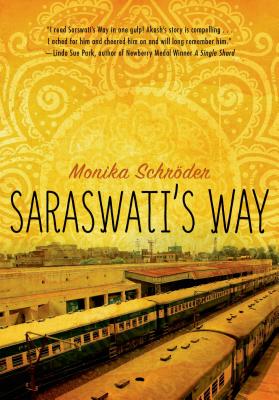 If the gods wanted Akash to have an education, he is told, they would give him one. But Akash has spent his entire twelve years poor and hungry. So he decides to take control of his own life and try for a scholarship to the city school where he can pursue his beloved math. But will challenging destiny prove to be more than he has bargained for? In this raw and powerful novel, fate and self-determination come together in unexpected ways, offering an unsentimental look at the realities of India.

Saraswati's Way is a 2011 Bank Street Best Children's Book of the Year.

I grew up in Germany in a small town near the Ruhr Valley. After finishing my university education with a master’s degree in history and social studies, I worked for several years as a research assistant in the German parliament. In 1995, I met my future husband while on a vacation in Egypt. At the time he was a teacher at Cairo American College, and in the summer of 1996 I joined him in Cairo. Since then I have taught in international schools in Egypt, Chile and Oman. In 2002, we moved to India where I am currently the elementary school librarian at the American Embassy School in New Delhi.

I love to travel to new places and to learn about different cultures. Of course, for my job as children’s librarian I read a lot of children’s books, but I also make time for adult literature, mostly historical fiction novels. If I’m not reading or writing, I love to bake or watch movies. And when my husband and I visit Germany, which we do each summer, we like to hike in the beautiful German forests.

“I read Saraswati's Way in one gulp! Akash's story is compelling because of Akash himself: a beautifully drawn boy who is by turns bewildered and resourceful; naive and clever; discouraged and determined. I ached for him and cheered him on and will long remember him.” —Linda Sue Park, author of Newberry Medal Winner A Single Shard

“Saraswati's Way rings with important truths: that cultural difference fascinates us into seeing the world from new perspectives while the universality of human experience touches us into embracing other ways of being; that knowledge of right and wrong are the same everywhere. I love everything about this book. Its depictions of a dusty Indian village, an exotic Indian festival, fantastical stories of Hindu deities, and a boy's fascination with the mysticism of numbers are truths unto themselves.” —Suzanne Fisher Staples, Newberry Honor author of Under the Persimmon Tree

“Monika Schroder gives a vivid picture of India and its street children in this powerful story of Akash, a twelve-year-old boy, who knows what he wants. He risks his life and his beliefs until he discovers Saraswati's way. This is a compelling tale of today's India from someone who knows it well.” —Gloria Whelan, author of the National Book Award Winner Homeless Bird

“Saraswati's Way is fascinating and exotic, while at the same time immediate and accessible. Like its protagonist, the book is clear-eyed and open-hearted, and filled with hope. And it even makes a fine case for the pleasures of math! I was transported. Monika Schröder is a writer worth reading.” —Paul Zelinsky, author/illustrator of the Caldecott Medal Book Rapunzel

“Saraswati's Way takes us into the world of a smart child hindered in his desire for an education by poverty and culture in today's India. Monika Schröder leads us through this unfamiliar world with the deft hands of an expert Cicero, so that we accept Hindu practices, child labor, and drug dealing as givens, not to be gawked at, but to be comprehended as we gain entrance into a very real child's psyche. She doesn't pull punches. This is a book to be respected and treasured.” —Donna Jo Napoli, author of The Wager

“Set in a rural Indian village as well as the bustling train station and streets of New Delhi, this novel provides young learners with a glimpse of what it could take for an orphaned and unwanted child to survive in the most challenging of circumstances. A relatively gentle tone helps to introduce middle grade readers to issues associated with child poverty and child labor that they may otherwise not read much about.” —EconKids