The Boy Who Lost Fairyland (Hardcover) 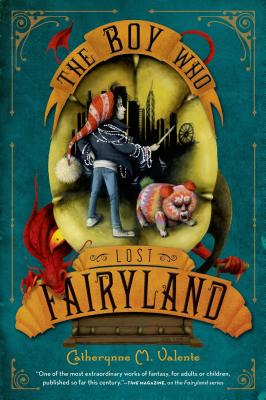 This is book number 4 in the Fairyland series.

When a young troll named Hawthorn is stolen from Fairyland by the Red Wind, he becomes a changeling-a human boy-in the strange city of Chicago, a place no less bizarre and magical than Fairyland. Left with a human family, Hawthorn struggles with his troll nature and his changeling fate, while attending school and learning about human kindnesses-and un-kindnesses.

In a starred review, Kirkus noted, "Every page of this book contains at least one stunning sentence. Valente's descriptions of the human world make it sound like an exotic place, even when she just lists things to see: "diamonds and dinosaur bones and Canadian geese and the Cathedral of Notre Dame and ballpoint pens." Readers may wish the words were food, so they could eat them up. And they may keep reading this series for just as long as people have been arguing about Oz."

Time magazine has praised Catherynne M. Valente's Fairyland books as "one of the most extraordinary works of fantasy, for adults or children, published so far this century." In this fourth installment of her saga, Valente's wisdom and wit will charm readers of all ages.

Catherynne M. Valente is the New York Times bestselling author of over two dozen works of fiction and poetry, including Palimpsest, the Orphan’s Tales series, Deathless, Radiance, and the crowdfunded phenomenon The Girl Who Circumnavigated Fairyland in a Ship of Her Own Making (and the four books that followed it). She is the winner of the Andre Norton, Tiptree, Sturgeon, Eugie Foster Memorial, Mythopoeic, Rhysling, Lambda, Locus, and Hugo awards, as well as the Prix Imaginales. Valente has also been a finalist for the Nebula and World Fantasy Awards. She lives on an island off the coast of Maine with a small but growing menagerie of beasts, some of which are human.

ANA JUAN is a world-renowned illustrator known in the United States for her wonderful covers for The New Yorker magazine, as well as the children's books The Night Eater, and Frida, written by Jonah Winter. She lives in Spain.

“Valente's Fairyland is as bizarre and beautiful as ever, with a Wonderland-like un-logic that will keep readers both delighted and slightly off-balance.” —The Horn Book

“A glorious balancing act between modernism and the Victorian Fairy Tale, done with heart and wisdom.” —Neil Gaiman, Newbery Award-winning author of The Graveyard Book

“A mad, toothsome romp of a fairy tale--full of oddments, whimsy, and joy.” —Holly Black, author of the Spiderwick Chronicles

“When I say that this book reminds me simultaneously of E. Nesbit, James Thurber, and the late Eva Ibbotson, I don't mean to take anything awy from its astonishing originality. It's a charmer from the first page, managing the remarkable parlay of being at once ridiculously funny and surprisingly suspenseful. Catherynne Valente is a find, at any age!” —Peter S. Beagle, author of The Last Unicorn