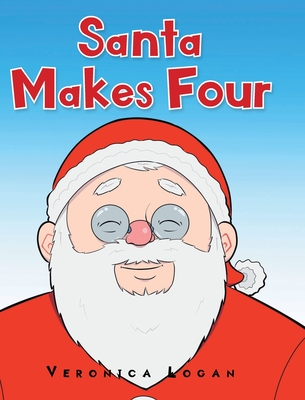 By Veronica Logan
$23.95
Ships from warehouse to store in 1-5 business days

Santa Makes Four is a simple story of a girl and her mom at the time of the inevitable talk about Santa. Christians everywhere struggle to relate Santa Claus to the story of Jesus. Some parishes choose to have Santa come during Christmas Eve mass and kneel before the baby Jesus. If this is true of your parish, you know that the sounds of the gasps in the church from the watching children are magical. This is often the only time the two stories are paired for a child, and even then, the connection is not clear.

Santa Makes Four strengthens that bond and weaves the details of Santa Claus into the tenets of the Trinity and Christian faith. Today's youth are increasingly independent. They find their information on their own from everywhere. They know more about the world than any of us ever did at their age. They also have a strong sense of fairness and equity. Even in this accelerated world, it is heartening to know that Santa's magic is still a childhood rite of passage. Despite the commercials, tweets, posts, and movies that say otherwise, children everywhere know that Santa is real. NASA tracks Santa's progress on Christmas Eve night; and tablets, phones, and other devices are all involved in trying to catch Santa as he completes his work Christmas Eve.

Santa Makes Four bridges the gap between the younger and older years of Santa belief. With some luck and Christmas magic, it can help Christian families all over the world strengthen their faith through the story of Santa Claus.