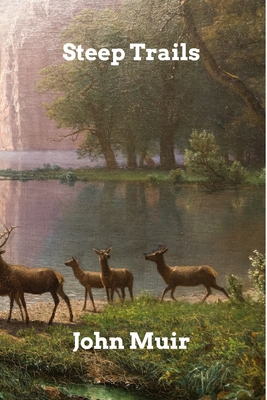 Steep Trails is a great natural history books by the great American naturalist John Muir that describes the mountains and forests of the western United States and the wildlife that exists there.

"The papers brought together in this volume have, in a general way, been arranged in chronological sequence. They span a period of twenty-nine years of Muir's life, during which they appeared as letters and articles, for the most part in publications of limited and local circulation. The Utah and Nevada sketches, and the two San Gabriel papers, were contributed, in the form of letters, to the San Francisco Evening Bulletin toward the end of the seventies. Written in the field, they preserve the freshness of the author's first impressions of those regions. Much of the material in the chapters on Mount Shasta first took similar shape in 1874. Subsequently it was rewritten and much expanded for inclusion in Picturesque California, and the Region West of the Rocky Mountains, which Muir began to edit in 1888. In the same work appeared the description of Washington and Oregon. The charming little essay "Wild Wool" was written for the Overland Monthly in 1875. "A Geologist's Winter Walk" is an extract from a letter to a friend, who, appreciating its fine literary quality, took the responsibility of sending it to the Overland Monthly without the author's knowledge. The concluding chapter on "The Grand Canyon of the Colorado" was published in the Century Magazine in 1902, and exhibits Muir's powers of description at their maturity."