The Treacherous World of the 16th Century & How the Pilgrims Escaped It: The Prequel to America's Freedom (Paperback) 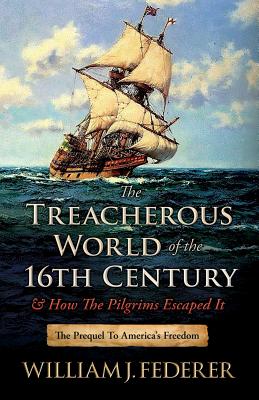 Discover the facts you've been missing from the Pilgrims' Thanksgiving story
Did freedom of religion & conscience exist in 16th century Europe?
How did kings of Spain, France & England, & Turkish Sultans, dominate people's lives?
What was the first empire "on which the sun never set"? How did its Invincible Armada sink?
Globalist Kings sought world empires. How miraculous was it for the Pilgrims to escape?
Did the Pilgrims experiment with communism?
How did the Dutch invention of "joint-stock companies" & the "stock exchange" fuel international trade?
How devastating were the Ottoman sieges of Constantinople, Malta & Vienna?
Did you know Pilgrims were terrorized by Muslim Barbary pirates?
Did you know our "calendar" was developed in the 16th century?
Who was Squanto & how did his amazing life rescue the fledgling Pilgrim community?
If you like speaking your views, participating in politics & sharing your faith without fear of government persecution, you will be fascinated by the compelling Pilgrim experience told from an amazing world perspective
--
Other chapters include:
-Age of Discovery
-Reformation
-Henry VIII
-Queen Elizabeth
-Role of the Printing Press
-Protestant Ripple Effect
-Suleiman the Magnificent
-Catherine de Medici
-Sir Francis Drake
-Sir Walter Raleigh
-The Lost Colony
-King James I
-The English Bible
-Puritan Religious Uniformity
-Jewish Influence on Pilgrims