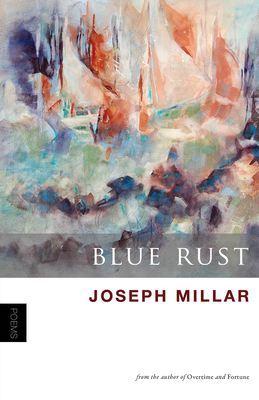 By Joseph Millar
Email or call for price
Hard to find: allow 24 hours for information

Like Conrad's Marlow, Joseph Millar speaks with fierce compassion and the authority of hard-won experience. In his remarkable third collection, Blue Rust, he lays down "the shield of irony" without taking up the consolations of easy sentiment or detached despair. The result is an unstrained originality: lyrics that avoid the metronome, leaps of imagination in which the associative logic never trails off into self-indulgent incoherence. Millar looks hard at a world that is doomed and beautiful. What sets Blue Rust apart is its ability to honor both sides.

JOSEPH MILLAR's first collection, Overtime (2001), was a finalist for the Oregon Book Award. A second collection, Fortune, appeared in 2007. Millar grew up in Pennsylvania, attended the Johns Hopkins Writing Seminars and spent 25 years in the San Francisco Bay area working at a variety of jobs, from telephone repairman to commercial fisherman. It would be two decades before he returned to poetry. His poems record the narrative of a life fully lived among fathers, sons, brothers, daughters, weddings and divorces, men and women. His work has won fellowships from the National Endowment for the Arts and a 2008 Pushcart Prize and has appeared in such magazines as DoubleTake, TriQuarterly, New Letters, The Southern Review, APR, and Ploughshares. In 1997 he gave up his job as telephone installation foreman to try his hand at teaching. Millar is now core faculty at Pacific University's Low Residency MFA and lives in Raleigh, North Carolina, with his wife, the poet Dorianne Laux.