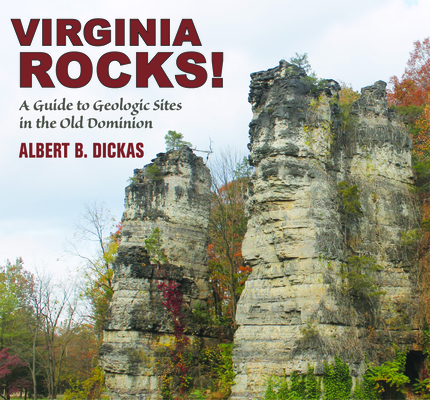 From the Eastern Shore to Cumberland Gap, Virginia stretches across five distinct regions, each home to unique and amazing geology. In the Coastal Plain�s wedge of fossil-rich sediments, a meteor impact crater�the sixth largest on Earth�helped determine the location of Chesapeake Bay. The Piedmont begins at the Fall Line, the series of East Coast waterfalls that mark the upstream limit to ship navigation, such as Belle Else in Richland, where the turbulent James River erodes potholes in the Petersburg Granite. Rising up from the rolling hills of the Piedmont, the Blue Ridge forms the spine of the state, its hard basalt and gneisses on display at Shenandoah National Park. Farther west, limestones in the Valley and Ridge are riddled with caves and sinkholes, with dissolution forming one of the wonders of the world at Natural Bridge State Park. Along the very western edge of the state is the Appalachian Plateau, where the No. 3 coal, know as America�s Favorite Fuel was extracted from the historic Pocahontas Mine. Virginia Rocks is part of the state-by-state Geology Rocks series that introduces readers to some of the most compelling and accessible geologic sites in each state. Author Albert Dickas has picked 50 of the best sites in Virginia for discussing the enormous variety of rocks, minerals, and landforms created over the course of the states more than 1 billion years of geologic history.