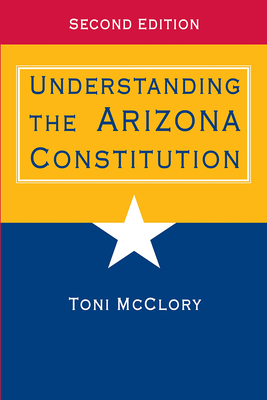 Arizona became the nation’s 48th state in 1912 and since that time the Arizona constitution has served as the template by which the state is governed. Toni McClory’s Understanding the Arizona Constitution has offered insight into the inner workings and interpretations of the document—and the government that it established—for almost a decade.

Since the book’s first publication, significant constitutional changes have occurred, some even altering the very structure of state government itself. There have been dramatic veto battles, protracted budget wars, and other interbranch conflicts that have generated landmark constitutional rulings from the state courts. The new edition of this handy reference addresses many of the latest issues, including legislative term limits, Arizona’s new redistricting system, educational issues, like the controversial school voucher program, and the influence of special-interest money in the legislature. A total of 63 propositions have reached the ballot, spawning heated controversies over same-sex marriage, immigration, and other hot-button social issues.

This book is the definitive guide to Arizona government and serves as a solid introductory text for classes on the Arizona Constitution. Extensive endnotes make it a useful reference for professionals within the government. Finally, it serves as a tool for any engaged citizen looking for information about online government resources, administrative rules, and voter rights. Comprehensive and clearly written, this book belongs on every Arizonan’s bookshelf.

Toni McClory teaches political science at Glendale Community College, before which she practiced law in Arizona for more than eighteen years. She was an assistant attorney general from 1976 to 1991, served a clerkship with the U.S. Court of Appeals, and was a judge pro tem for the Arizona Court of Appeals.

“This witty, informative volume may be the best book of the year for Arizonans.”—Arizona Daily Star

“Marketed as ‘an authoritative guide to Arizona government—written in plain language,’ this fascinating book lives up to its billing. Every Arizonan should read it, and keep it handy for future reference.”—Journal of Arizona History

“I am compelled to recommend this useful primer to all Arizonans. I don’t know another book that does a better job of explaining Arizona government.”—Tucson Weekly, Best Reading of the Year