Delaware's Forgotten Folk: The Story of the Moors and Nanticokes (Paperback) 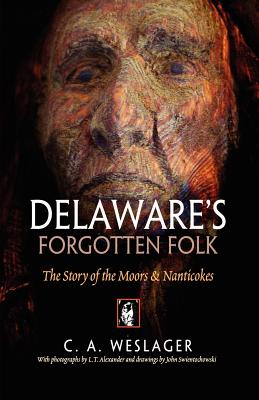 By C. a. Weslager, L. T. Alexander (Photographer), John Swientochowski (Drawings by)
$22.50
Ships from warehouse to store in 1-5 business days

It is offered not as a textbook nor as a scientific discussion, but merely as reading entertainment founded on the life history, social struggle, and customs of a little-known people.--From the Preface

C. A. Weslager's Delaware's Forgotten Folk chronicles the history of the Nanticoke Indians and the Cheswold Moors, from John Smith's first encounter with the Nanticokes along the Kuskakarawaok River in 1608, to the struggles faced by these uniquely multiracial communities amid the racial and social tensions of mid-twentieth-century America. It explores the legend surrounding the origin of the two distinct but intricately intertwined groups, focusing on how their uncommon racial heritage--white, black, and Native American--shaped their identity within society and how their traditional culture retained its significance into their present.

Weslager's demonstrated command of available information and his familiarity with the people themselves bespeak his deep respect for the Moor and Nanticoke communities. What began as a curious inquiry into the overlooked peoples of the Delaware River Valley developed into an attentive and thoughtful study of a distinct group of people struggling to remain a cultural community in the face of modern opposition. Originally published in 1943, Delaware's Forgotten Folk endures as one of the fundamental volumes on understanding the life and history of the Nanticoke and Moor peoples.

C. A. Weslager (1909-94) was an esteemed writer and historian of Delaware. He authored a number of books, including Delaware's Buried Past and Dutch Explorers, Traders, and Settlers in the Delaware Valley, 1609-1644, both published by the University of Pennsylvania Press, and The Nanticoke Indians, Past and Present.