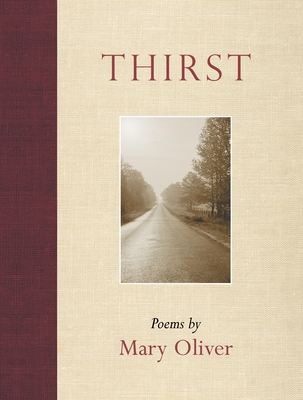 Thirst, a collection of forty-three new poems from the Pulitzer Prize-winner Mary Oliver, introduces two new directions in the poet's work. Grappling with grief at the death of her beloved partner of over forty years, she strives to experience sorrow as a path to spiritual progress, grief as part of loving and not its end. And within these pages she chronicles for the first time her discovery of faith, without abandoning the love of the physical world that has been a hallmark of her work for four decades. In three stunning long poems, Oliver explores the dimensions and tests the parameters of religious doctrine, asking of being good, for example, "To what purpose? / Hope of Heaven? Not that. But to enter / the other kingdom: grace, and imagination, / and the multiple sympathies: to be as a leaf, a rose,/ a dolphin."

A private person by nature, Mary Oliver (1935–2019) gave very few interviews over the years. Instead, she preferred to let her work speak for itself. And speak it has, for the past five decades, to countless readers. The New York Times recently acknowledged Mary Oliver as “far and away, this country’s best-selling poet.” Born in a small town in Ohio, Oliver published her first book of poetry in 1963 at the age of 28; No Voyage and Other Poems, originally printed in the UK by Dent Press, was reissued in the United States in 1965 by Houghton Mifflin. Oliver has since published twenty books of poetry and six books of prose. As a young woman, Oliver studied at Ohio State University and Vassar College, but took no degree. She lived for several years at the home of Edna St. Vincent Millay in upper New York state, companion to the poet’s sister Norma Millay. It was there, in the late ’50s, that she met photographer Molly Malone Cook. For more than forty years, Cook and Oliver made their home together, largely in Provincetown, Massachusetts, where they lived until Cook’s death in 2005. Over the course of her long and illustrious career, Oliver has received numerous awards. Her fourth book, American Primitive, won the Pulitzer Prize for Poetry in 1984. She has also received the Shelley Memorial Award; a Guggenheim Fellowship; an American Academy and Institute of Arts and Letters Achievement Award; the Christopher Award and the L.L. Winship/PEN New England Award for House of Light; the National Book Award for New and Selected Poems; a Lannan Foundation Literary Award; and the New England Booksellers Association Award for Literary Excellence. Oliver’s essays have appeared in Best American Essays 1996, 1998, 2001; the Anchor Essay Annual 1998, as well as Orion, Onearth and other periodicals. Oliver was editor of Best American Essays 2009. Oliver’s books on the craft of poetry, A Poetry Handbook and Rules for the Dance, are used widely in writing programs. She is an acclaimed reader and has read in practically every state as well as other countries. She has led workshops at various colleges and universities, and held residencies at Case Western Reserve University, Bucknell University, University of Cincinnati, and Sweet Briar College. From 1995, for five years, she held the Catharine Osgood Foster Chair for Distinguished Teaching at Bennington College. She has been awarded Honorary Doctorates from The Art Institute of Boston (1998), Dartmouth College (2007) and Tufts University (2008).

Mary Oliver moves by instinct, faith, and determination. She is among out finest poets, and still growing.--Alicia Ostriker, The Nation

"These are life-enhancing and redemptive poems that coax the sublime from the subliminal."--Sally Connolly, Poetry

"It has always seemed, across her 15 books of poetry, five of prose and several essays and chapbooks, that Mary Oliver might leave us at any minute. Even a 1984 Pulitzer Prize couldn't pin her to the ground. She'd change quietly into a heron or a bear and fly or walk on forever. Her poems contain windows, doors, transformations, hints on how to escape the body; there's the 'glamour of death' and the 'life after the earth-life.' This urge to be transformed is yoked to a joy in this moment, this life, this body. 'Every day I walk out into the world / to be dazzled, then to be reflective,' she writes in 'Long Afternoon at the Edge of Little Sister Pond.' 'I think there isn't anything in this world I don't / admire,' she writes in 'Hum'…The new poems teem with creation: ravens, bees, hawks, box turtles, bears. The landscape is Thoreauvian: ponds, marsh, grass and cattails; New England's 'salt brightness'; and fields in 'pale twilight.'"--Susan Salter Reynolds, Los Angeles Times

"I think of Oliver as a fierce, uncompromising lyricist, a loyalist of the marshes. Hers is a voice we desperately need."--Maxine Kumin, Women's Review of Books