Twice as Hard: The Stories of Black Women Who Fought to Become Physicians, from the Civil War to the 21st Century (Hardcover) 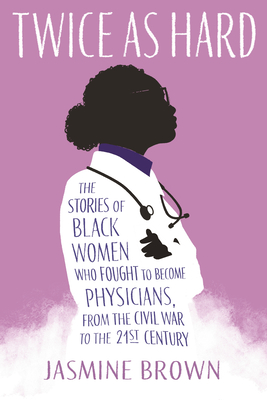 · Dr. Rebecca Lee Crumpler, who graduated from medical school only fourteen months after the Emancipation Proclamation was signed and provided medical care for the newly freed slaves who had been neglected and exploited by the medical system.

· Dr. Edith Irby Jones, the first African American to attend a previously white-only medical school in the Jim Crow South, where she was not allowed to eat lunch with her classmates or use the women’s bathroom. Still, Dr. Irby Jones persisted and graduated from medical school, going on to directly inspire other black women to pursue medicine such as . . .

· Dr. Joycelyn Elders, who, after meeting Dr. Irby Jones, changed her career ambitions from becoming a Dillard’s salesclerk to becoming a doctor. In 1993, President Bill Clinton appointed Dr. Elders as the US surgeon general, making her the first African American and second woman to hold this position.

Brown tells the stories of these doctors from the perspective of a black woman in medicine. Her journey as a medical student already has parallels to those of black women who entered medicine generations before her. What she uncovers about these women’s struggles, their need to work twice as hard and be twice as good, and their ultimate success serves as instruction and inspiration for new generations considering a career in medicine or science.

Jasmine Brown is a medical student at the Perelman School of Medicine at the University of Pennsylvania. She completed an MPhil in the history of science, medicine, and technology at the University of Oxford on a Rhodes Scholarship. As an undergraduate at Washington University in St. Louis, she founded the Minority Association of Rising Scientists and served as its president, working to increase the number of underrepresented minorities in science and medicine.

“Well-researched reclamation of neglected yet invaluable history . . . Still, Brown, as remarkable as the pioneers she profiles, ends on a high note, vowing to become a ‘changemaker.’”
—Booklist, Starred Review

“Brown debuts with an eye-opening history of nine African American women in medicine . . . This immersive tribute to a group of pioneering women will inspire readers of all backgrounds.”
—Publishers Weekly

“At once a celebration of Black women’s medical achievements throughout history and an indictment of misogynoir in medical education, Twice as Hard is an essential, enraging read that deftly weaves the author’s own experience as a Black woman in medicine among the rich historical profiles.”
—Olivia Campbell, author of Women in White Coats: How the First Women Doctors Changed the World of Medicine

“Powerful, timely, and important . . . Twice as Hard is an exceptional book that covers the expansive history of African American women physicians from the 1860s to present-day. This is essential reading for anyone who wants to know more about the history of medicine in America.”
—Leana Wen, MD, MSc, author of Lifelines: A Doctor’s Journey in the Fight for Public Health

“A fascinating journey into the depths of American history told through undervalued voices. Brown brings to life the stories of nine amazing women who fought racial and gender discrimination at every turn on their paths to becoming pioneering physicians.”
—Damon Tweedy, MD, author of Black Man in a White Coat: A Doctor’s Reflections on Race and Medicine

“Revelatory! Jasmine Brown brings us the overlooked history of a powerful force in medicine—Black women physicians. A medical student herself, Brown assembles an inspiring panel of teachers, nine pioneers who reach across the generations as mentors and role models. Their stories are striking for their timeliness as well as their urgency.”
—Danielle Ofri, MD, PhD, author of When We Do Harm: A Doctor Confronts Medical Error