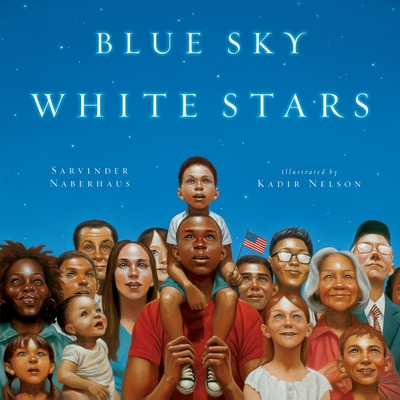 An inspiring and patriotic tribute to the beauty of the American flag, a symbol of America’s history, landscape, and people, illustrated by New York Times bestselling and Caldecott-honor winning artist Kadir Nelson

Wonderfully spare, deceptively simple verses pair with richly evocative paintings to celebrate the iconic imagery of our nation, beginning with the American flag. Each spread, sumptuously illustrated by award-winning artist Kadir Nelson, depicts a stirring tableau, from the view of the Statue of Library at Ellis Island to civil rights marchers shoulder to shoulder, to a spacecraft at Cape Canaveral blasting off.  This book is an ode to America then and now, from sea to shining sea.

Sarvinder Naberhaus is the author of Boom Boom and the forthcoming Lines. She was born in India and grew up in the heartland of America. She lives in Iowa with her family.

Kadir Nelson is an acclaimed artist and the illustrator of several New York Times bestselling picture books, including his authorial debut We Are the Ship: The Story of Negro League Baseball, which won a Coretta Scott King Award and a Sibert Medal. Kadir has received three additional Coretta Scott King Awards and five Coretta Scott King honors. He has also received two Caldecott Honors, for Henry's Freedom Box: A True Story from the Underground Railroad and Moses: When Harriet Tubman Led Her People to Freedom, and has twice received the NAACP Image Award for Outstanding Literary Work.

* "Many readers will feel that this book looks like the America they know." —Publishers Weekly, starred review

* "Though ostensibly a picture book for younger children, this has the ability to reach a much broader audience, and spark discussion of hopes and fears. It’s hard to imagine a book better suited to this time." —Booklist, starred review

* "Naberhaus and Nelson give new life to Old Glory for the youngest of readers." —Kirkus, starred review

* "Timely homage to the relationship among America's majesty, its hopefulness and diversity, and its flag." —School Library Journal, starred review