One Soul at a Time: The Story of Billy Graham (Library of Religious Biography (Lrb)) (Hardcover) 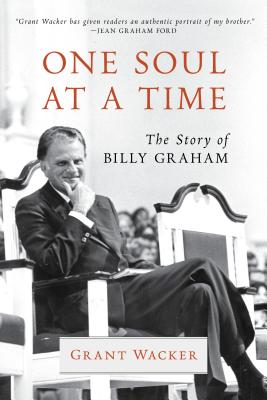 For more than five decades Billy Graham (1918-2018) ranked as one of the most influential voices in the Christian world. Nearly 215 million people around the world heard him preach in person or through live electronic media, almost certainly more than any other person. For millions, Graham was less a preacher than a Protestant saint. While remaining orthodox at the core, over time his approach on many issues became more irenic and progressive. And his preaching continued to resonate, propelled by his powerful promise of a second chance.

Drawing on decades of research on Billy Graham and American evangelicalism, Grant Wacker has marshalled personal interviews, archival research, and never-before-published photographs from the Graham family and others to tell the remarkable story of one of the most celebrated Christians in American history.

Where Wacker's previous work on Graham, America's Pastor, focused on the preacher's relation to the nation's culture, One Soul at a Time offers a sweeping, easy-to-read narrative of the life of the man himself.

Grant Wacker is the Gilbert T. Rowe Professor Emeritus of Christian History at Duke Divinity School. A past president of the American Society of Church History, he is the author of Heaven Below: Early Pentecostals and American Culture, Religion in Nineteenth Century America, and America's Pastor: Billy Graham and the Shaping of a Nation.