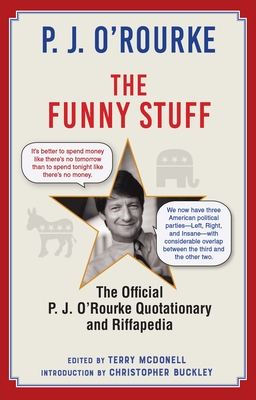 A compendium of quotes and riffs by P.J. O'Rourke on
subjects ranging from government ("Giving money and power to politicians is
like giving car keys and whiskey to teenage boys") to fishing ("a sport
invented by insects and you are the bait") to apps ("we need a no-app app--let's
call it a nap") to be published on what would have been his 75th birthday. "P. J. O'Rourke was the funniest writer of his
generation, one of the smartest and one of the most prolific. Now that he
belongs to the ages, P.J. takes his rightful place along with Oscar Wilde, Mark
Twain and Dorothy Parker in the Pantheon of Quote Gods."--Christopher
Buckley from his introduction When The Penguin Dictionary of Modern Humorous Quotations was
published in 1994, P. J. O'Rourke had more entries than any living writer. And
he kept writing funny stuff for another 28 years. Now, for the first time, the
best material is collected in one volume. Edited by his longtime friend
and member of the American Society of Magazine Editors Hall of Fame Terry
McDonell, THE FUNNY STUFF is arranged in six sections, organized by subject in
alphabetical order from Agriculture to Xenophobia. From his earliest days at
the National Lampoon in the 1970s, through his classic
reporting for Rolling Stone in the 80s and 90s to his
post-Trump, pandemic, new media observations of recent years, P.J. produced
incisive, amusing copy. Not only did P.J. write memorable one-liners, he also
meticulously constructed riffs that built to a crescendo of hilarity and
outrage--and are still being quoted years later. His prose has the electric
verbal energy of Tom Wolfe or Hunter Thompson, but P.J. is more flat out funny.
And through it all comes his clear-eyed take on politics, economics, human
nature--and fun. THE FUNNY STUFF is a book for P.J. fans to devour but also a
book that will bring new readers and stand as testament to one of the truly
original American writers of the last 50 years.

P. J. O'ROURKE (1947-2022) was anauthor, journalist, and political satirist who wrote twenty-two books onsubjects as diverse as politics and cars and etiquette and economics. Parliamentof Whores and Give War a Chance both reached #1 on the New YorkTimes bestseller list. After beginning his career writing for the NationalLampoon, O'Rourke went on to serve as foreign affairs desk chief for RollingStone where he reported from far-flung places. Later he wrote for a numberof publications, including The Atlantic, the Daily Beast, the WallStreet Journal, and the Weekly Standard, and was a longtime paneliston NPR's Wait Wait...Don't Tell Me.