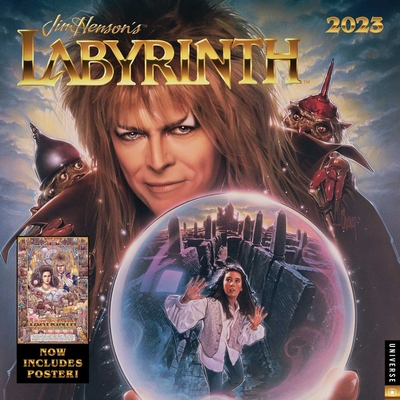 On our shelves
(PLEASE NOTE: This book cannot be returned!)

Jim Henson’s Labyrinth™ 2023 Wall Calendar features images from the iconic Jim Henson movie. Almost 40 years later we're still fascinated and in love with the iconic film. Labyrinth is a seminal film for an entire generation of fans, who are now passing their love for this movie on to their own children. Starring a young Jennifer Connelly as a babysitter who gets more than she bargained for when the idle wish she makes for her annoying baby brother to be taken away is granted by an evil goblin king...played by David Bowie. Sarah (Connelly) is given 13 hours to solve the titular Labyrinth, or else risk losing her brother forever. Directed by Jim Henson, and featuring creatures created by the world-famous Henson Creature Shop, Labyrinth™ is a spectacle unlike any other.

The Jim Henson Company is an American entertainment company known for its innovations in the field of puppetry, particularly through the creation of the Muppets characters.