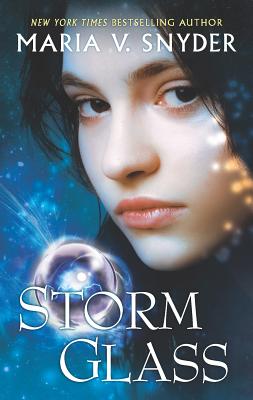 This is book number 4 in the Chronicles of Ixia series.

Enter into a stunning world of molten magic, where storms can be captured in glass and a magician's powers can remain hidden...until challenged.

As a glassmaker and a magician-in-training, Opal Cowan understands trial by fire. Someone has sabotaged the Stormdancer clan's glass orbs, killing their most powerful magicians. The Stormdancers--particularly the mysterious and mercurial Kade--require Opal's unique talents to prevent it from happening again.

But when the mission goes awry, Opal must tap into a new kind of magic. As she delves into the intrigue behind the mysterious glass orbs, she uncovers secrets not even she could anticipate. With lives hanging in the balance--including her own--Opal must control her powers...powers that could lead to disaster beyond anything she's ever known.

Maria V. Snyder is the "New York Times" bestselling author of the Study series, the Glass series, the Healer series, "Inside Out," and "Outside In." Born and raised in Philadelphia, she earned a Bachelors of Science degree in Meteorology from Penn State and a Master of Arts degree in fiction writing from Seton Hill University. Unable to part ways with Seton Hill, Maria is currently a teacher and mentor for the MFA program. Find her on the Web at MariaVSnyder.com.

"Epic in scope, yet rich with minute details of character and setting, the second book in Snyder's Glass series is a delight. " RT Book Reviews on SEA GLASS

"Filled with Snyder's trademark sarcastic humor, fast-paced action and creepy villainy, Touch of Power is a spellbinding romantic adventure that will leave readers salivating for the next book in the series."-USA TODAY

"The descriptions are vivid and draw you into the rugged journey across the mountains. You'll want to follow their voyage into the next book."-RT Book Reviews on Touch of Power

"This is one of those rare books that will keep readers dreaming long after they've read it."-Publishers Weekly, starred review, on Poison Study

"As the final book in the series Spy Glass does not disappoint" FantasyBookReview.co.uk