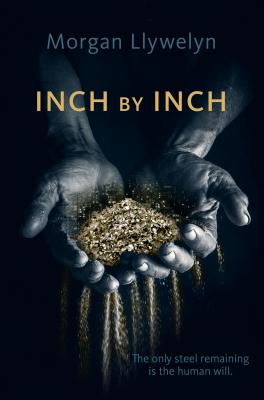 This is book number 2 in the Step by Step series.

In Inch by Inch, book two in the trilogy, the residents of Sycamore River have only just adjusted to the end of the Change. Until the morning people notice that metal starts to behave oddly.

The world is pushed into global war, and a small band of Sycamore River survivors only have one another. They have to survive the unthinkable.

Step by Step
Drop by Drop

MORGAN LLYWELYN is the author of such highly praised historical novels as the New York Times bestselling Lion of Ireland, Bard, Brian Boru, Finn Mac Cool, Pride of Lions, and 1916. She is celebrated as the high priestess of Celtic historical fiction and has won numerous awards for her historical fiction. She lives near Dublin, Ireland.

"Ms. Llywelyn's command of language is exquisite."—SFRevu on Only the Stones Survive

"Her prose is by turns reflective, lyrical, and stalwart."—Publishers Weekly

“A timely and gripping novel. . . . The historical characters are woven into a masterful plot.” —The Irish Times on 1916

"The works of Morgan Llywelyn are awe-inspiring."—Jean K. Bills, President and Founder, Celtic Women International on 1949

“A captivating story.”—Kirkus Reviews on 1949