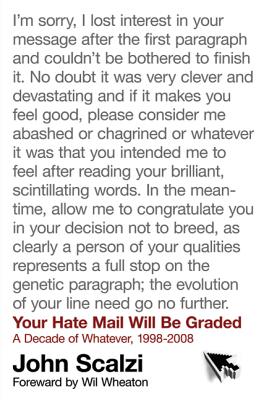 On September 13, 1998, John Scalzi sat down in front of his computer to write the first entry in his blog Whatever--and changed the history of the Internet as we know it today.

What, you're not swallowing that one? Okay, fine: He started writing Whatever and amused about 15 people that first day. If that many. But he kept at it, for ten years and running. Now 40,000 people drop by on a daily basis to see what he's got to say.

About what? Well, about whatever: Politics, writing, family, war, popular culture and cats (especially with bacon on them). Sometimes he's funny. Sometimes he's serious (mostly he's sarcastic). Sometimes people agree with him. Sometimes they send him hate mail, which he grades on originality and sends back. Along the way, Scalzi's become a best-selling, award-winning author, a father, and a geek celebrity. But no matter what, there's always another Whatever post to amuse and/or enrage his readers.

Your Hate Mail Will Be Graded collects some of the best and most popular Whatever entries from the first ten years of the blog – a decade of Whatever, presented in delightfully random form, just as it should be.

* Winner of the 2009 Hugo Award for Best Non-Fiction Book