The Watch That Ends the Night: Voices from the Titanic (Paperback) 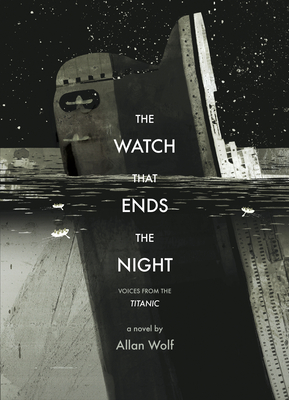 Arrogance and innocence, hubris and hope — twenty-four haunting voices of the Titanic tragedy, as well as the iceberg itself, are evoked in a stunning tour de force. Slipping in telegraphs, undertaker’s reports, and other records, poet Allan Wolf offers a breathtaking, intimate glimpse at the lives behind the tragedy, told with clear-eyed compassion and astounding emotional power.

Allan Wolf, an expert poet and storyteller, is the author of the award-winning New Found Land: Lewis and Clark’s Voyage of Discovery and the YA novel Zane’s Trace. He lives in Asheville, North Carolina.

A masterpiece. Wolf leaves no emotion unplumbed, no area of research uninvestigated, and his voices are so authentic they hurt. Everyone should read it.
—Booklist (starred review)

Wolf constructs a richly textured novel in verse that recreates the Titanic's ill-fated journey, predominantly through the voices of her passengers... Wolf's carefully crafted characters evolve as the voyage slides to its icy conclusion; readers may be surprised by the potency of the final impact.
—Publishers Weekly (starred review)

Twenty-four voices-of passengers, rats and even the iceberg-evoke the human tragedy of the ill-fated voyage. Wolf brings the history and, more importantly, the human scale of the event to life by giving voice to the players themselves . . . A lyrical, monumental work of fact and imagination that reads like an oral history revved up by the drama of the event.
—Kirkus Reviews (starred review)

Wolf's novel in verse gives voice, through first-person accounts, to a cross section of passengers and crew on the Titanic: how they boarded, why they're there, and how they face the disaster. . . . The themes of natural disaster, technology, social class, survival, and death all play out here.
—The Horn Book (starred review)

Wolf allows readers to experience the tragedy from all decks.
—Bulletin of the Center for Children's Books

This is a well-detailed and historically accurate portrayal of the events and brings the feelings and emotions of the characters alive.
—Library Media Connection (highly recommended)

Moving... From their embarkation on the "great floating city . . . with its cargo of human hearts," the characters take turns relating their stories even as disaster engulfs them.
—The Wall Street Journal

The resulting record of the brief voyage gives readers an emotional punch. The strength of the effect is astonishing given that the ship sank nearly one hundred years ago and has been the stuff of legend ever since... Very enthusiastically recommended.
—Children's Literature

Exhaustively researched, The Watch That Ends the Night vividly limns the naivete, the disbelief, and finally the hopelessness of the ship’s crew and passengers.
—Poetry Foundation (book of the month)