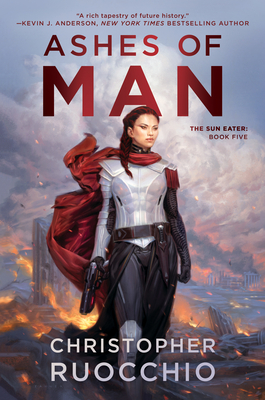 This is book number 5 in the Sun Eater series.

The fifth novel of the galaxy-spanning Sun Eater series merges the best of space opera and epic fantasy, as Hadrian Marlowe continues down a path that can only end in fire.

The galaxy is burning.

With the Cielcin united under one banner, the Sollan Empire stands alone after the betrayal of the Commonwealth. The Prophet-King of the Cielcin has sent its armies to burn the worlds of men, and worse, there are rumors...whispers that Hadrian Marlowe is dead, killed in the fighting.

But it is not so. Hadrian survived with the help of the witch, Valka, and together they escaped the net of the enemy having learned a terrible truth: the gods that the Cielcin worship are real and will not rest until the universe is dark and cold.

What is more, the Emperor himself is in danger. The Prophet-King has learned to track his movements as he travels along the borders of Imperial space. Now the Cielcin legions are closing in, their swords poised to strike off the head of all mankind.