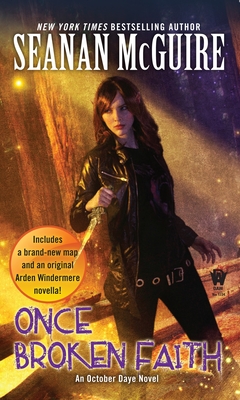 This is book number 10 in the October Daye series.

Politics have never been October “Toby” Daye’s strong suit. When she traveled to the Kingdom of Silences to prevent them from going to war with her home, the Kingdom of the Mists, she wasn’t expecting to return with a cure for elf-shot and a whole new set of political headaches.

Now the events she unwittingly set in motion could change the balance of modern Faerie forever, and she has been ordered to appear before a historic convocation of monarchs, hosted by Queen Windermere in the Mists and overseen by the High King and Queen themselves.

Naturally, things have barely gotten underway when the first dead body shows up. As the only changeling in attendance, Toby is already the target of suspicion and hostility. Now she needs to find a killer before they can strike again—and with the doors locked to keep the guilty from escaping, no one is safe.

As danger draws ever closer to her allies and the people she loves best, Toby will have to race against time to prevent the total political destabilization of the West Coast and to get the convocation back on track…and if she fails, the cure for elf-shot may be buried forever, along with the victims she was too slow to save.

Because there are worse fates than sleeping for a hundred years.

Seanan McGuire is a California-based author with a strong penchant for travel and can regularly be found just about any place capable of supporting human life (as well as a few places that probably aren’t). Early exposure to a vast number of books left her with a lifelong affection for the written word, and led, perhaps inevitably, to her writing books of her own, starting somewhere around the age of eleven. The October Daye novels are her first urban fantasy series, and the InCryptid novels are her second series, both published by DAW and both of which have put her in the New York Times bestseller list. Seanan was the winner of the 2010 John W. Campbell Award for Best New Writer; Rosemary and Rue, the first novel in the October Daye series, was named one of the Top 20 Paranormal Fantasy Novels of the Past Decade; and her novel Feed, written under the name Mira Grant, was named as one of Publishers Weekly's Best Books of 2010. She also won a Hugo for her podcast, and is the first person to be nominated for five Hugo Awards in a single year. You can visit her at seananmcguire.com or on Twitter at @seananmcguire.

Praise for the October Daye series:

"Prepare to be dazzled.... Like the best of urban fantasy, with each reveal and mystery solved, Toby's world grows ever more enticing. As seductive as faerie itself, this is one series I could never give up." —All Things Urban Fantasy

"With Ashes of Honor, McGuire has crafted a deeply personal and intense story that will keep you on the edge, hoping to be pushed over. In my opinion, it is, hands down, the best Toby to date." —The Ranting Dragon