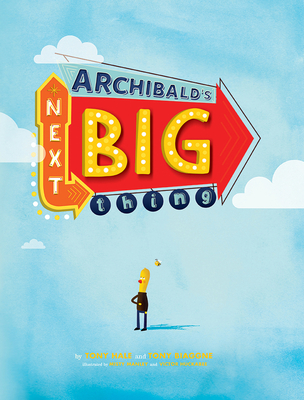 In this extraordinary adventure, an extra-ordinary newly-hatched chicken named Archibald Strutter is looking to find his place in the world while feeling insecure about his abilities, especially when compared to his talented siblings and classmates. His three brothers and one sister have each found their Big Thing (including a brother chicken who impressively grows human hair), while the only Big Thing Archibald has planned is what he's eating for lunch. But everything changes for Archibald when he receives a mysterious blue card that reads, "Your Big Thing Is Here!" Accompanied by a friendly bee named Bee, Archibald heads out on a fantastic journey, where he encounters wondrous places and incredible people, all the while searching for something more, not realizing every moment he faces is it—Archibald's Next Big Thing. It's a story that reminds readers that, while looking for the next big thing isn't a bad thing, big and beautiful things are all around us—right now.

Tony Hale is an actor best known for his role as Gary Walsh, the downtrodden personal aide to Julia Louis-Dreyfus’s Vice President Selina Meyers on HBO’s Emmy-nominated political comedy, Veep. In 2013, Hale won an Emmy for Outstanding Supporting Actor in a Comedy Series and was nominated again in 2014 for his performance. Prior to Veep, he costarred as the socially awkward Buster Bluth on the ground-breaking, Emmy Award-winning series Arrested Development. He also costarred alongside Sandra Bullock and Melissa McCarthy in the Paul Feig-directed action-comedy, The Heat. His first break came in 1999, when he gained recognition for his dance to "Mr. Roboto" in the popular television commercial for Volkswagen, later spoofed in an episode of Arrested Development. He lives in Los Angeles. Tony Biaggne is an advertising copywriter and creative mastermind who works in a commercial creative studio. Most recently, he raised awareness and support for clean water in developing countries. Best known as the 1991 Idaho State Pantomime Champion, he has been writing stories since he could hold a crayon. He lives in St. Louis, Missouri. Misty Manley is an art director and graphic designer who works in both advertising and publishing. She lives St. Louis, MIssouri. Victor Huckabee is an established artist with a dandy portfolio filled with gorgeous creative work from illustration to graphic design. He lives in Nashville, Tennessee.

"This is our new favorite book for kids who want a longer picture book and have the attention span for 66 wacky, wonderful, oversized pages. The characters in this story are imaginative, funny, and unusual. The bold and bright illustrations capture all the personality of this story. A wonderful story about appreciating life and finding enjoyment in each day. This book by Emmy Award-winning Tony Hale does not disappoint."  —The Shopping Mama, blog

"Archibald goes on countless wacky wonderful adventures but is always in search of the next big thing. The lesson he learns by the end of the book is to stop and appreciate the here and now. It’s a good message for kids and adults and the style of the book is fun to read with really stellar illustrations, graphics and typography . . . It’s long and in depth, while still being a big picture book."  —Mommy Shorts, blog

"This is a charming and funny book. The message is gently massaged into the reader's (and readee's) minds. A fun story wrapped around a warm reminder about enjoying life—a theme that will not be lost on adults or on children! Loved it."  —Stuart F. Montaldo, author, Cogno: The Legends