Genghis Khan and the Making of the Modern World (Hardcover) 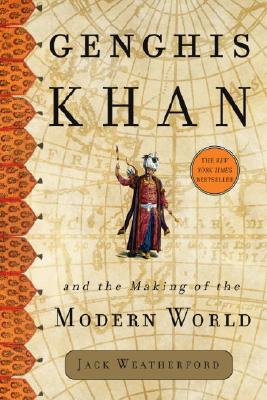 By Jack Weatherford
Hard to find: allow 24 hours for information

The name Genghis Khan often conjures the image of a relentless, bloodthirsty barbarian on horseback leading a ruthless band of nomadic warriors in the looting of the civilized world. But the surprising truth is that Genghis Khan was a visionary leader whose conquests joined backward Europe with the flourishing cultures of Asia to trigger a global awakening, an unprecedented explosion of technologies, trade, and ideas. In Genghis Khan and the Making of the Modern World, Jack Weatherford, the only Western scholar ever to be allowed into the Mongols’ “Great Taboo”—Genghis Khan’s homeland and forbidden burial site—tracks the astonishing story of Genghis Khan and his descendants, and their conquest and transformation of the world.

Fighting his way to power on the remote steppes of Mongolia, Genghis Khan developed revolutionary military strategies and weaponry that emphasized rapid attack and siege warfare, which he then brilliantly used to overwhelm opposing armies in Asia, break the back of the Islamic world, and render the armored knights of Europe obsolete. Under Genghis Khan, the Mongol army never numbered more than 100,000 warriors, yet it subjugated more lands and people in twenty-five years than the Romans conquered in four hundred. With an empire that stretched from Siberia to India, from Vietnam to Hungary, and from Korea to the Balkans, the Mongols dramatically redrew the map of the globe, connecting disparate kingdoms into a new world order.

But contrary to popular wisdom, Weatherford reveals that the Mongols were not just masters of conquest, but possessed a genius for progressive and benevolent rule. On every level and from any perspective, the scale and scope
of Genghis Khan’s accomplishments challenge the limits of imagination. Genghis Khan was an innovative leader, the first ruler in many conquered countries to put the power of law above his own power, encourage religious freedom, create public schools, grant diplomatic immunity, abolish torture, and institute free trade. The trade routes he created became lucrative pathways for commerce, but also for ideas, technologies, and expertise that transformed the way people lived. The Mongols introduced the first international paper currency and postal system and developed and spread revolutionary technologies like printing, the cannon, compass, and abacus. They took local foods and products like lemons, carrots, noodles, tea, rugs, playing cards, and pants and turned them into staples of life around the world. The Mongols were the architects of a new way of life at a pivotal time in history.

In Genghis Khan and the Making of the Modern World, Jack Weatherford resurrects the true history of Genghis Khan, from the story of his relentless rise through Mongol tribal culture to the waging of his devastatingly successful wars and the explosion of civilization that the Mongol Empire unleashed. This dazzling work of revisionist history doesn’t just paint an unprecedented portrait of a great leader and his legacy, but challenges us to reconsider how the modern world was made.

JACK WEATHERFORD is a professor of anthropology at Macalester College in Minnesota. He is a specialist in tribal people and the author of Indian Givers, Native Roots, Savages and Civilization, and The History of Money.

"There is very little time for reading in my new job. But of the few books I've read, my favourite is Genghis Khan and the Making of the Modern World by Jack Weatherford (Crown Publishers, New York). It's a fascinating book portraying Genghis Khan in a totally new light. It shows that he was a great secular leader, among other things."
—Manmohan Singh, Prime Minister of India

“It’s hard to think of anyone else who rose from such inauspicious beginnings to something so awesome, except maybe Jesus.”
—Harper’s

“Weatherford is a fantastic storyteller. . . . [His] portrait of Khan is drawn with sufficiently self-complicating depth. . . . Weatherford’s account gives a generous view of the Mongol conqueror at his best and worst.”
—Minneapolis Star Tribune