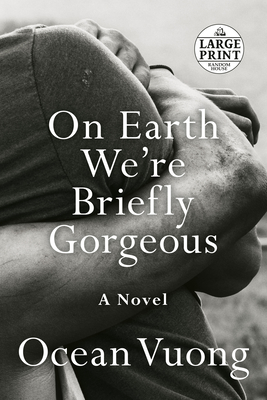 By Ocean Vuong
$28.00
Available from warehouse in 1-5 business days

Sometimes I read a book so amazing but so difficult that I’m not sure whether to recommend it. Ocean Vuong’s new novel, On Earth We’re Briefly Gorgeous is an example. I’ve put aside my hesitation because this book is one I will never forget, and I do want you to read it.  It's written as a letter to his mother by a young Vietnamese-American boy—his mother calls him Little Dog—whose family has immigrated to Hartford, Connecticut. He falls in love with an American boy one summer when he's working in a tobacco barn. The language alone would have made me love it, but the relationships between Little Dog and his lover and between Little Dog and his mother and grandmother are startlingly beautiful and moving. (This book will be released on June 4, and QRB will host Vuong on June 7--preorder now for reserved seat tickets.)

On Earth We're Briefly Gorgeous contains many love stories that seem equal parts violent, haunting, and beautiful, but the one the love story that captivated me most was between Little Dog and his grandmother. She is his playmate, protector (sometimes), storyteller and explainer. At the age of three Little Dog moved to Hartford, Connecticut from Vietnam with his mother, grandmother and aunt. The novel is a letter from  28-year-old Little Dog to his illiterate mother, revisiting the years in-between. I don't know what magic Ocean Vuong practiced to make me so completely inhabit the skin of a gay, Vietnamese-American child, teenager, and man, but he did.  If we read, as Anne Tyler has said, to live more than one life, this book succeeded in adding a new one to mine.

“Alright 2019, this is the novel to beat. On Earth We’re Briefly Gorgeous is the rare novel that makes you experience reading in a slightly different way and shows you that, no matter how many books you’ve read, something new and uniquely beautiful can still be found. The novel takes the form of a letter written by the main character, Little Dog, to his mother — an immigrant from Vietnam who cannot read. The power of Vuong’s poetic writing shimmers with every paragraph, and each phrase is a carefully considered, emotional journey. Grappling with themes of identity, sexuality, addiction, violence, and finding your place in a world where you feel you don’t belong, this book already feels like a modern classic, destined to be read and talked about for years to come.”
— Caleb Masters, Bookmarks, Winston-Salem, NC

Longlisted for the 2019 National Book Award for Fiction, the Carnegie Medal in Fiction, the 2019 Aspen Words Literacy Prize, and the PEN/Hemingway Debut Novel Award

Shortlisted for the 2019 Center for Fiction First Novel Prize

Winner of the 2019 New England Book Award for Fiction!

Named one of the most anticipated books of 2019 by Vulture, Entertainment Weekly, Buzzfeed, Los Angeles Times, Boston Globe, Oprah.com, Huffington Post, The A.V. Club, Nylon, The Week, The Rumpus, The Millions, The Guardian, Publishers Weekly, and more.

“A lyrical work of self-discovery that’s shockingly intimate and insistently universal…Not so much briefly gorgeous as permanently stunning.” —Ron Charles, The Washington Post

Poet Ocean Vuong’s debut novel is a shattering portrait of a family, a first love, and the redemptive power of storytelling

On Earth We’re Briefly Gorgeous is a letter from a son to a mother who cannot read. Written when the speaker, Little Dog, is in his late twenties, the letter unearths a family’s history that began before he was born — a history whose epicenter is rooted in Vietnam — and serves as a doorway into parts of his life his mother has never known, all of it leading to an unforgettable revelation. At once a witness to the fraught yet undeniable love between a single mother and her son, it is also a brutally honest exploration of race, class, and masculinity. Asking questions central to our American moment, immersed as we are in addiction, violence, and trauma, but undergirded by compassion and tenderness, On Earth We’re Briefly Gorgeous is as much about the power of telling one’s own story as it is about the obliterating silence of not being heard.

With stunning urgency and grace, Ocean Vuong writes of people caught between disparate worlds, and asks how we heal and rescue one another without forsaking who we are. The question of how to survive, and how to make of it a kind of joy, powers the most important debut novel of many years.

Ocean Vuong is the author of the critically acclaimed poetry collection Night Sky with Exit Wounds and the New York Times bestselling novel On Earth We’re Briefly Gorgeous. A recipient of the 2019 MacArthur "Genius" Grant, he is also the winner of the Whiting Award and the T.S. Eliot Prize. His writings have been featured in The Atlantic, Harper's Magazine, The Nation, The New Republic, The New Yorker, and The New York Times. Born in Saigon, Vietnam, he currently lives in Northampton, Massachusetts.