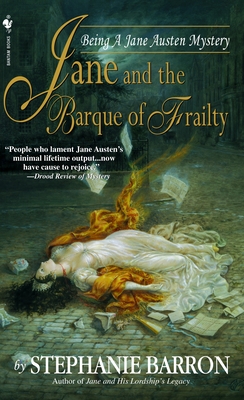 This is book number 9 in the Being A Jane Austen Mystery series.

In her latest spellbinding escapade, Jane Austen arrives in London to watch over the printing of her first novel, and finds herself embroiled in a crime that could end more than her career. For it is up to Jane to tease a murderer out of the ton, lest she—and her country—suffer a dastardly demise.…

On the heels of completing Sense and Sensibility, Jane heads to Sloane Street for a monthlong visit with her brother Henry and his wife, Eliza. Hobnobbing with the Fashionable Great at the height of the Season, Jane is well aware of their secrets and peccadilloes. But even she is surprised when the intimate correspondence between a Russian princess and a prominent Tory minister is published in the papers for all to see. More shocking, the disgraced beauty is soon found with her throat slit on Lord Castlereagh’s very doorstep.

Everyone who’s anyone in high society is certain the spurned princess committed the violence upon herself. But Jane is unconvinced. Nor does she believe the minister guilty of so grisly and public a crime. Jane, however, is willing to let someone else investigate—until a quirk of fate thrusts her and Eliza into the heart of the case…as prime suspects!

Striking a bargain with the authorities, Jane secures seven days to save herself and Eliza from hanging. But as her quest to unmask a killer takes her from the halls of government to the drawing rooms of London’s most celebrated courtesan, only one thing is sure: her failure will not only cut short her life. It could lead to England’s downfall. A compulsively readable, uncommonly elegant novel of historical suspense, Jane and the Barque of Frailty once again proves Jane Austen a sleuth to be reckoned with.

“Satisfying right to the last revelation…. The author excels at both period detail and modern verve…. Sparkling.”—Publishers Weekly

“Barron's research is impeccable, bringing the sights and sounds of Austen's era to the page with detail and sparkle.... This is great fun for Austen fans who like a little mystery with their manners.”—Rocky Mountain News