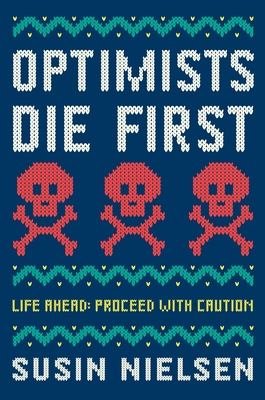 By Susin Nielsen
Hard to find: allow 24 hours for information

Award-winning author Susin Nielsen has written a laugh-out-loud and heartrending novel for fans of Robyn Schneider’s Extraordinary Means and Cammie McGovern’s Say What You Will.

Sixteen-year-old Petula de Wilde is anything but wild. A former crafting fiend with a happy life, Petula shut herself off from the world after a family tragedy. She sees danger in all the ordinary things, like crossing the street, a bug bite, or a germy handshake. She knows: life is out to get you.

The worst part of her week is her comically lame mandatory art therapy class with a small group of fellow misfits. Then a new boy, Jacob, appears at school and in her therapy group. He seems so normal and confident, though he has a prosthetic arm; and soon he teams up with Petula on a hilarious project, gradually inspiring her to let go of some of her fears. But as the two grow closer, a hidden truth behind why he’s in the group threatens to derail them, unless Petula takes a huge risk. . .

“A poignant exploration into the nuances of healing.” —Quill and Quire, Starred

Susin Nielsen got her start feeding cast and crew on the popular television series Degrassi Junior High. They hated her food, but they saw a spark in her writing. Nielsen went on to pen sixteen episodes of the hit TV show. Since then she has written for many Canadian TV series.

Nielsen’s first two young adult novels, Word Nerd and Dear George Clooney: Please Marry My Mom, won critical acclaim and multiple young readers’ choice awards. The Reluctant Journal of Henry K. Larsen won the prestigious Governor General’s Literary Award and the Canadian Library Association’s Children’s Book of the Year. Most recently, We Are All Made of Molecules was shortlisted for the Governor General’s Literary Award, longlisted for the Carnegie Medal, and nominated for the Canadian Library Association’s Children’s Book of the Year. Nielsen lives in Vancouver with her family and two extremely destructive cats. Visit her at susinnielsen.com; on Facebook at Susin Nielsen, Author; and on Twitter at @susinnielsen.

“Grief and guilt permeate Nielsen’s (We Are All Made of Molecules) empathic and deeply moving story, balanced by sharply funny narration and dialogue.” —Publishers Weekly, Starred

“The dialogue is effortless, the plot moves at a fast pace, and the scenes come alive. . . . a poignant exploration into the nuances of healing.” —Quill and Quire, Starred

“Heartbreaking and hopeful, this is a solid choice for readers looking for a book to make them cry and laugh at the same time.” —Booklist

“Susin Nielsen once more brings readers a story that is infused with light-hearted humour, even as it touches on numerous weighty issues.” —Canadian Children's Book News

"Here, as in Nielsen’s previous award-winning novels, her use of first-person narration is compellingly believable. The short chapters sprint by with sitcom pacing and snappy dialogue . . . This novel is about how good people can make mistakes and then learn to accept them." --Vancouver Sun