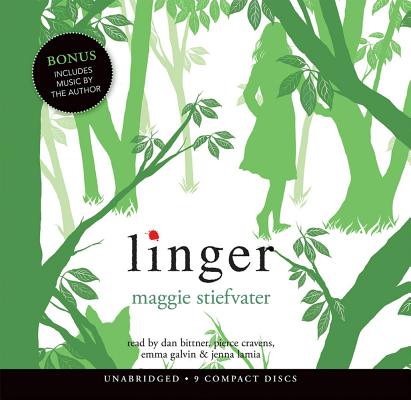 By Maggie Stiefvater
$88.79
Email or call for price.

This is book number 2 in the Shiver series.

“This second book in The Wolves of Mercy Falls series is no less magical than the first, Shiver. Sam is trying to adjust to being a full-time human and the leader of the pack of winter wolves as an early spring thaw occurs. Some of the new members are having problems, and Grace seems to be suffering from the same sort of illness. The sense of a 'ticking clock' is prevalent in this book, and the cliffhanger ending will have readers baying at the moon, waiting for the next installment!”
— Jackie Blem, Tattered Cover Bookstore, Denver, CO

In Maggie Stiefvater's thrilling sequel to Shiver, love is the question and the answer.

FORMAT: 8 CDs, Unabridged
NARRATORS: Jenna Lamia & David Ledoux
In Maggie Stiefvater's Shiver, Grace and Sam found each other. Now, in Linger, they must fight to be together. For Grace, this means defying her parents and keeping a very dangerous secret about her own well-being. For Sam, this means grappling with his werewolf past . . . and figuring out a way to survive into the future. Add into the mix a new wolf named Cole, whose own past has the potential to destroy the whole pack. And Isabelle, who already lost her brother to the wolves . . . and is nonetheless drawn to Cole.

Maggie Stiefvater is the #1 New York Times bestselling author of the novels Shiver, Linger, Forever, and Sinner. Her novel The Scorpio Races was named a Michael L. Printz Honor Book by the American Library Association. The first book in The Raven Cycle, The Raven Boys, was a Publishers Weekly Best Book of the Year and the second book, The Dream Thieves, was an ALA Best Book for Young Adults. The third book, Blue Lily, Lily Blue, received five starred reviews. The final book, The Raven King, received four. Her latest book is All the Crooked Saints. She is also an artist and musician. She lives in Virginia with her husband and their two children. You can visit her online at maggiestiefvater.com.