To Night Owl From Dogfish (Paperback) 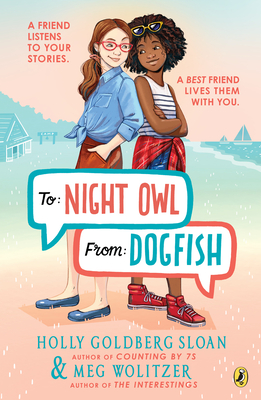 A hilarious update of The Parent Trap, this book is told solely through the emails, texts, and instant messages of two very different twelve-year-olds: Avery (“Night Owl”) and Bett (“Dogfish”). When their dads fall in love and send them to the same summer camp without their knowledge, anxious, bookish Avery has to figure out how to coexist with outgoing, fearless Bett. The two girls are sure that they're going to have the worst summer ever, but a grudging friendship begins to form, each email exchange more outlandish than the last. Full of vivid, quirky characters with memorable voices, this book will have you laughing and cheering for Avery and Bett's highjinks.

“If there is a word that perfectly sums up this book, it has to be ‘adorable.’ Bett and Avery are NOT friends, but when they discover their dads are dating and sending them to summer camp together, they conspire via e-mails and letters to split the dads up and get out of going to camp together. What ends up happening is much more than anyone could have imagined. This book is everything you want in a middle-grade novel: sweet, humorous, adventurous, and packed with wonderful characters. It is also just a beautiful story about families and relationships. Cuddle up with this one!”
— Nichole Cousins, White Birch Books, North Conway, NH

From two extraordinary authors comes a moving, exuberant, laugh-out-loud novel about friendship and family, told entirely in emails and letters.

Avery Bloom, who's bookish, intense, and afraid of many things, particularly deep water, lives in New York City. Bett Devlin, who's fearless, outgoing, and loves all animals as well as the ocean, lives in California. What they have in common is that they are both twelve years old, and are both being raised by single, gay dads.

When their dads fall in love, Bett and Avery are sent, against their will, to the same sleepaway camp. Their dads hope that they will find common ground and become friends--and possibly, one day, even sisters.

But things soon go off the rails for the girls (and for their dads too), and they find themselves on a summer adventure that neither of them could have predicted. Now that they can't imagine life without each other, will Bett and Avery (who sometimes call themselves Night Owl and Dogfish) figure out a way to be a family?

Holly Goldberg Sloan was born in Ann Arbor, Michigan and spent her childhood living in Holland; Istanbul, Turkey; Washington, DC; Berkeley, California; and Eugene, Oregon. After graduating from Wellesley College and spending some time as an advertising copywriter, she began writing family feature films, including Angels in the Outfield and Made in America. She is the author of the New York Times bestsellers Counting by 7s and Short, among other novels. Meg Wolitzer was born in Brooklyn, New York, grew up in the town of Syosset, on Long Island, and sold her first novel, Sleepwalking, while a senior in college. She is the New York Times bestselling author of numerous novels for adults, including The Interestings, The Ten-Year Nap, The Wife, and The Female Persuasion; the young adult novel Belzhar; and the middle-grade novel The Fingertips of Duncan Dorfman.

Acclaim for To Night Owl from Dogfish

"Built on a foundation of absurdity, coincidence and the occasional rather good one-liner, the novel manages the difficult balancing act of using increasingly ridiculous, and often funny, situations to drill home the idea that every close relationship takes hard work, particularly when things start going south." —New York Times

* "This is a convincing and heartwarming look into the experiences of female friendship . . . An imaginative and compelling middle-grade novel depicting modern friendships and modern families." —School Library Journal, starred review

“A sweet and amusing tale that celebrates diversity while reinforcing the power of love and the importance of family.” —Kirkus

“Written entirely in emails and letters, this laugh-out-loud novel showcases the collaborative skills of bestselling authors Sloan (Short) and Wolitzer (Bellzhar) . . . Featuring a dramatic climax and a host of surprising twists, the novel affirms that families conventional and unconventional are families just the same.” —Publishers Weekly

“Even if the target readership eschews email these days, they’ll be hard-pressed not to be laughing out loud at the witty, clever email and letter repartee among the girls, their dads, and the rest of the supporting cast . . . Alternately heartwarming and hilarious.” —Booklist

“The book’s affectionately satirical take on our twelve-year-old heroines and their approaches to life is funny, and the epistolary format is an engaging way into the girls’ personalities and defenses.” —BCCB

“While Bett and Avery’s non-stop comical high jinks prove entertaining, the girls symbolize a broader definition of family and experience real struggles . . . Educators and librarians seeking an interesting novel that promotes diversity and might appeal to reluctant readers will want to add this book to their shelves.” —VOYA