Billion Dollar Burger: Inside Big Tech's Race for the Future of Food (Hardcover) 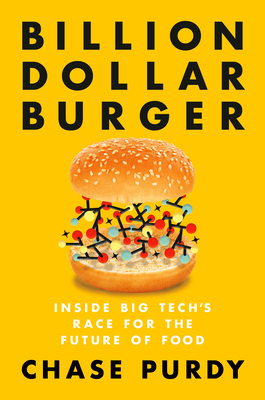 By Chase Purdy
$28.00
Available from warehouse in 1-5 business days

The riveting story of the entrepreneurs and renegades fighting to bring lab-grown meat to the world.

The trillion-dollar meat industry is one of our greatest environmental hazards; it pollutes more than all the world's fossil-fuel-powered cars. Global animal agriculture is responsible for deforestation, soil erosion, and more emissions than air travel, paper mills, and coal mining combined. It also, of course, depends on the slaughter of more than 60 billion animals per year, a number that is only increasing as the global appetite for meat swells.

But a band of doctors, scientists, activists, and entrepreneurs have been racing to end animal agriculture as we know it, hoping to fulfill a dream of creating meat without ever having to kill an animal. In the laboratories of Silicon Valley companies, Dutch universities, and Israeli startups, visionaries are growing burgers and steaks from microscopic animal cells and inventing systems to do so at scale--allowing us to feed the world without slaughter and environmental devastation.

Drawing from exclusive and unprecedented access to the main players, from polarizing activist-turned-tech CEO Josh Tetrick to lobbyists and regulators on both sides of the issue, Billion Dollar Burger follows the people fighting to upend our food system as they butt up against the entrenched interests fighting viciously to stop them.

The stakes are monumentally high: cell-cultured meat is the best hope for sustainable food production, a key to fighting climate change, a gold mine for the companies that make it happen, and an existential threat for the farmers and meatpackers that make our meat today.

Chase Purdy is a journalist exploring the business, politics, and technologies that are changing the landscape of food and how people interact with it. He has worked at Quartz and Politico, as well as in newsrooms across the American South, including The Roanoke Times, The Ledger, and The News Virginian. He is a National Fellow at New America. He lives in New York City.

“A thorough, thoughtful dive into the revolution coming for our plates. I learned so much.”—Bianca Bosker, author of Cork Dork


“A wild ride to the far horizon of our food system. Chase Purdy breaks important new ground in this gripping account about the innovators, activists, and big-money investors who are reinventing meat as we know it. Not only are they changing the world—they’re doing it a lot faster than you think.” –Christopher Leonard, author of Kochland


“This is a fast-paced, early peek into what will soon be the topic at dinner for the next two decades: lab-grown meat. What do we call it, is it good, should I eat it? Read this and get ahead of the curve.” —Kevin Kelly, Senior Maverick at Wired and author of The Inevitable


“Can humanity move beyond the slaughterhouse? Billion Dollar Burger is a compulsive and well-researched account of the scientists, entrepreneurs, and activists trying to save the world through high-tech meat.”—Douglas Rushkoff, author of Team Human


"A deeply reported account of the science, politics, and personalities behind cell-cultured meat that every eater needs to read. Chase Purdy brings the stuff of science fiction to life in this fascinating book." —John Mackey, Founder and CEO Whole Foods Market


"Someday, humans will look back today's industrial meat production with horror. Chase Purdy brilliantly chronicles the emergence of a new industry poised to set us on the path to a more humane future, with dramatic implications for agriculture, the environment and the way we think about food."-- Martin Ford, author of Rise of the Robots and Architects of Intelligence