Dinner at the Center of the Earth (Vintage International) (Paperback) 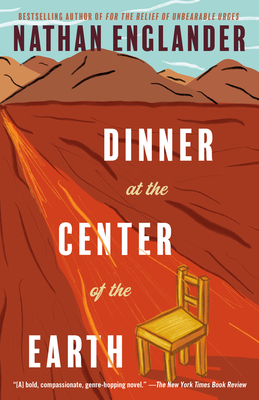 By Nathan Englander
$16.95
Email or call for price.

A political thriller set against the Israeli-Palestinian conflict, from the Pulitzer-nominated, bestselling author of For the Relief of Unbearable Urges. A Los Angeles Times Best Book of the Year

“Blends elements of spy thriller and love story, magical realism, and an all-too-real history of one of the world’s most intractable problems: peace between Israel and its neighbors." —The Boston Globe

In the Negev desert, a nameless prisoner languishes in a secret cell, his only companion the guard who has watched over him for a dozen years. Meanwhile, the prisoner’s arch nemesis—The General, Israel’s most controversial leader—lies dying in a hospital bed. From Israel and Gaza to Paris, Italy, and America, Englander provides a kaleidoscopic view of the prisoner’s unlikely journey to his cell. Dinner at the Center of the Earth is a tour de force—a powerful, wryly funny, intensely suspenseful portrait of a nation riven by insoluble conflict, and the man who improbably lands at the center of it all.

Nathan Englander is the author of the novel The Ministry of Special Cases and the story collections For the Relief of Unbearable Urges and What We Talk About When We Talk About Anne Frank, a winner of the Frank O’Connor International Short Story Award, and a finalist for the Pulitzer Prize. He is Distinguished Writer-in-Residence at New York University and lives in Brooklyn, New York, with his wife and daughter.

"Superb: a work of psychological precision and moral force, with an immediacy that captures both timeless human truth and the perplexities of the present day." —Colson Whitehead

"Dinner at the Center of the Earth blends elements of spy thriller and love story, magical realism, and an all-too-real history of one of the world’s most intractable problems: peace between Israel and its neighbors." —The Boston Globe

"It’s difficult to describe Englander’s novel without giving something away. There’s a delicious puzzle that becomes evident as it unfolds. . . . As weighty and political as Dinner at the Center of the Earth seems, it’s also a plot-driven page-turner. . . . We must now compare Englander to Graham Greene as well as Philip Roth. And he comes off well in the comparison." —Houston Chronicle

"Dinner at the Center of the Earth illuminates the zealot’s blindness, the patriot’s struggle for clarity, and the enduring dream of a coming together." —O, The Oprah Magazine

"Englander writes the stories I am always hoping for." —Geraldine Brooks

"Moving. . . . A twisty tale of spycraft and false allegiances unfolds, but what stands out is Mr. Englander’s insistence on finding romance amid the violence and deception. . . . The ageless struggle between Jews and Arabs comes to resemble a desperate lover’s embrace." —The Wall Street Journal

"A literary spy thriller. . . . Englander is as wise and funny and original and moving as ever." —Financial Times

"An absolute joy to read. . . . A dark, profound meditation on the state of Israel and also a gripping thriller, full of twists and moral ambiguity." —The Jewish Chronicle

"One of the best we have." —Column McCann

"A searing message about the difficulty of just action and human connection amid the pingpong match of retaliation in the Middle East." —Newsday

"[A] complicated but masterful exploration of the many contradictions of the modern State of Israel." —Haaretz

"Striking. . . . A thought-provoking political thriller with some romance and cheeky humor thrown in for good measure." —BuzzFeed

"Englander has produced a masterpiece of literary imagination that seems to mirror his own evolution." —The Jerusalem Post