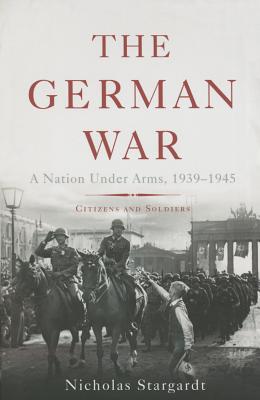 By Nicholas Stargardt
Email or call for price
Hard to find: allow 24 hours for information

A groundbreaking history of what drove the Germans to fight -- and keep fighting -- for a lost cause in World War II
In The German War, acclaimed historian Nicholas Stargardt draws on an extraordinary range of firsthand testimony -- personal diaries, court records, and military correspondence -- to explore how the German people experienced the Second World War.
When war broke out in September 1939, it was deeply unpopular in Germany. Yet without the active participation and commitment of the German people, it could not have continued for almost six years. What, then, was the war the Germans thought they were fighting? How did the changing course of the conflict -- the victories of the Blitzkrieg, the first defeats in the east, the bombing of German cities -- alter their views and expectations? And when did Germans first realize they were fighting a genocidal war?
Told from the perspective of those who lived through it -- soldiers, schoolteachers, and housewives; Nazis, Christians, and Jews -- this masterful historical narrative sheds fresh and disturbing light on the beliefs and fears of a people who embarked on and fought to the end a brutal war of conquest and genocide.

Nicholas Stargardt is one of Britain's foremost scholars of Nazi Germany. He is a professor of modern European history at Magdalen College, Oxford, and a fellow of the Royal Historical Society. The author of Witnesses of War: Children's Lives Under the Nazis, Stargardt lives in Oxford, England.

"[A] gripping new book.... To write like this requires a rare sensitivity and psychological sophistication coupled with a degree of fearlessness.... Stargardt impresses not only as a cultural historian. He also has an impressively strong grasp on the military narrative of the war. And this is indispensable.... Stargardt has given us a truly profound piece of history."
—Adam Tooze, New York Times Book Review

"Nicholas Stargardt's...gracefully written The German War offers by far the most comprehensive and readable guide to these issues...This is splendid scholarship.... Anyone interested in National Socialist Germany, World War II and the many murderous regimes that still disfigure the earth should relish The German War."—Wall Street Journal

"[Stargardt's] method of using letters and diaries of ordinary Germans yields unexpected insights, both into the Germans' humanity and their turn to barbarism."
—Economist

"This vivid history of everyday life captures the complex feelings of ordinary Germans under the Nazi regime.... A superb study."
—Guardian

"[Stargardt] draws on diaries, letters, and contemporary documents to paint a huge social canvas of Germans at war, soldiers and civilians, men and women of all ages...[he] tells his bleak story fluently and well, and illustrates it with a host of telling and often unfamiliar anecdotes."
—New York Review of Books

"Enthralling.... Stargardt puts together a complex portrait of a nation gripped by patriotism and resentment, thrilled by early military victories, and proud of the fighting skills of the Wehrmacht."
—Foreign Affairs

In his new and excellent book, The German War, Oxford University historian Nicholas Stargardt exhumes the letters and diaries of German soldiers and others. He details how a cultured nation went insane, how ordinary soldiers became mass killers, and how the churches of Germany looked the other way as the innocent were murdered."—Washington Post

"Superbly researched and clearly written, The German War is an important and significant book."—Spectator, (UK)

"[A] massive but thorough meditation.... A well-researched, unsettling social history of war that will prove deeply thought-provoking--even worrying--for readers who wonder what they might have done under the same circumstances."
—Kirkus Reviews

"The German War brilliantly and with impressive nuance and texture deals with the astounding questions of how the most educated and cultured nation on earth could unloose such a murderous, barbarous and genocidal war.... Stargardt smoothly and vividly weaves together the stories of more than a score of individual Germans from all walks of life and the unfolding events of the war."—Steve Forbes, Forbes.com