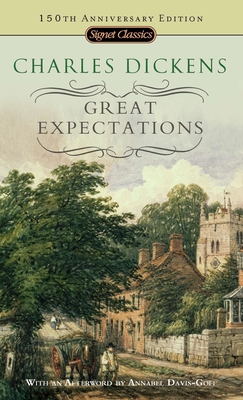 From the agony of Charles Dickens’ disenchantment with the Victorian middle class comes a novel of spellbinding mystery and a profound examination of moral values.

An orphan living with his older sister and her kindly husband, Pip is hired by wealthy and embittered Miss Havisham as a companion for her and her beautiful adopted daughter, Estella. His years in service to the Havishams fill his heart with the desire to rise above his station in life. Pip’s wish is fulfilled when a mysterious benefactor provides him with “great expectations”—the means to be tutored as a gentleman.

Thrust into London’s high-society circles, Pip grows accustomed to a life of leisure, only to find himself lacking as a suitor competing for Estella’s favor. After callously discarding everything he once valued for his own selfish pursuits, Pip learns the identity of his patron—a revelation that shatters his very soul.

As a child, Charles Dickens (1812–70) came to know not only hunger and privation, but also the horror of the infamous debtors’ prison and the evils of child labor. A surprise legacy brought release from the nightmare of prison and “slave” factories and afforded Dickens the opportunity of two years’ formal schooling. He taught himself shorthand and worked as a parliamentary reporter until his writing career took off with the publication of Sketches by Boz (1836) and The Pickwick Papers (1837). As a novelist and magazine editor, Dickens had a long run of serialized success through Our Mutual Friend (1864–65). In later years, ill health slowed him down, but he continued his popular dramatic readings from his fiction to an adoring public, which included Queen Victoria. At his death, The Mystery of Edwin Drood remained unfinished.

Stanley Weintraub is the author or editor of more than fifty books of biography, culture history, and military history, including The London Yankees, Whistler, Victoria, and Uncrowned King: The Life of Prince Albert. He retired from Pennsylvania State University as Evan Hugh Professor Emeritus and director of Institute for the Arts and Humanistic Studies.

Annabel Davis-Goff is the author of The Dower House, This Cold Country, and The Fox’s Walk. All three novels were selected by the New York Times as Notable Books. She is also the author of Walled Gardens, a family memoir, and is editor of The Literary Companion to Gambling. She now teaches literature at Bennington College.

"No story in the first person was ever better told."