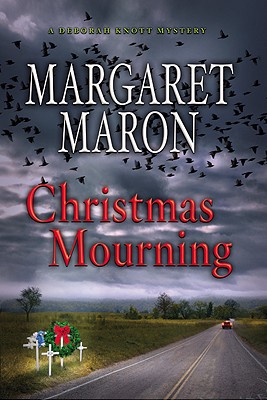 By Margaret Maron
Email or call for price
Out of print

This is book number 16 in the A Deborah Knott Mystery series.

“Judge Deborah Knott returns in a solid winter outing with a theme torn from local headlines. As Deborah and Dwight prepare for holidays and their first anniversary, they find themselves drawn into community tragedies that go deeper than they know. A big pleasure of the series is meeting Deborah's large extended family, whose many younger members make their debut here. You'd love to have this clan as your neighbor!”
— Rosemary Pugliese, Quail Ridge Books, Raleigh, NC

It's Christmas in rural North Carolina's Colleton County and Judge Deborah Knott is looking forward to a family celebration when a tragedy clouds the holiday season. A beautiful young cheerleader dies in a car crash and the community is devastated by her death. Sheriff's Deputy Dwight Bryant soon learns that her death was not a simple accident, and more lives may be lost unless he and Deborah can discover why she died.

Margaret Maron grew up in the country near Raleigh, North Carolina, but for many years lived in Brooklyn, New York. When she and her artist husband returned to the farm that had been in her family for a hundred years, she began a series based on her own background. The first book, Bootlegger's Daughter, became a Washington Post bestseller that swept the major mystery awards for its year -- winning the Edgar, Agatha, Anthony, and Macavity Awards for Best Novel -- and is among the 100 Favorite Mysteries of the Century as selected by the Independent Mystery Booksellers Association.

Later, her Deborah Knott novels Up Jumps the Devil, Storm Track, and Three-Day Town each also won the Agatha Award for Best Novel. Margaret is also the author of the Sigrid Harald series of detective novels. In 2008, Maron received the North Carolina Award for Literature, the highest civilian honor the state bestows on its authors. And in 2013, the Mystery Writers of America celebrated Maron's contributions to the mystery genre by naming her a Grand Master -- an honor first bestowed on Agatha Christie. To find out more about her, you can visit MargaretMaron.com.

On DEATH'S HALF ACRE
"[Maron] skillfully portrays the growing tension between family farmers and suburbanites. As always Maron weaves in a couple of subplots that keep things interesting and allow her to touch on a range of social issues."—Associated Press

On CHRISTMAS MOURNING
"Maron makes you yearn to belong to an extended family, bake Christmas cookies with the Knott nieces and nephews and climb into Dwight's arms. She plots like a modern-day Christie, but the North Carolina charm is all her own."—Kirkus

"Warm and authentic family relationships are the heart of this evergreen series."—Publishers Weekly