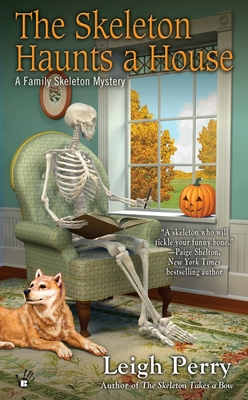 By Leigh Perry
Email or call for price
Hard to find: allow 24 hours for information

This is book number 3 in the A Family Skeleton Mystery series.

What holiday could bring more warmth to a skeleton’s chest cavity than Halloween? And when you’re a living skeleton who’s not supposed to be seen outside the house, it’s a welcome chance to get some fresh air and rub bony elbows with people. That’s why Sid doesn’t mind wearing a full-body dog suit and going as Scooby-Doo along with Georgia Thackery’s Velma to the Halloween Howl.

Sid can’t wait to go through the Haunted House—but he gets rattled for real when a genuine dead body is discovered. Trapped inside as the police quickly seal off the crime scene, Sid makes no bones about dropping the dog suit and posing as an actual skeleton. This murder is a skull-scratcher, but as long as Sid is on the inside, he might as well case the joint to figure out who used the cover of darkness to commit the perfect crime…

Leigh Perry is also the author of The Skeleton Takes a Bow and A Skeleton in the Family.

"Dr. Georgia Thackery is smart, resourceful, and determined to be a great single mom to her teenager. Georgia is normal in every respect—except that her best friend happens to be a skeleton named Sid. You'll love the adventures of this unexpected mystery-solving duo."—#1 New York Times bestselling author Charlaine Harris

“Adjunct English professor Georgia Thackery makes a charming debut in A Skeleton in the Family. Georgia is fiercely loyal to her best friend, Sid, an actual skeleton who is somehow still ‘alive.’ When Sid sees someone he remembers from his past life—who later turns up dead—Georgia finds herself trying to put together the pieces of Sid’s past as she works to hunt down a killer. Amateur sleuth Georgia, and her sidekick, Sid, are just plain fun!”—Sofie Kelly, New York Times bestselling author of Faux Paw

“No bones about it, Leigh Perry hooked me right from the beginning. An unusual premise, quirky characters and smart, dry humor season this well-told mystery that kept me guessing until the very end. It's too bad Perry's sleuth is fictional—I'd invite Georgia over for dinner in a heartbeat.” —Bailey Cates, New York Times bestselling author of Magic and Macaroons

"A delightful cozy with a skeleton who will tickle your funny bone."—Paige Shelton, New York Times bestselling author of If Onions Could Spring Leeks