If You Ask Me: (And of Course You Won't) (Paperback) 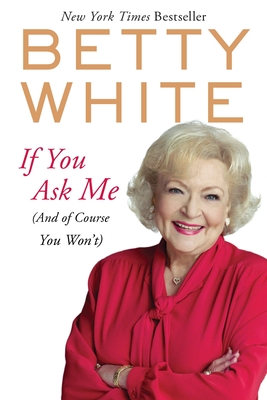 The New York Times bestseller from the beloved actress and Hollywood icon who's made us laugh on shows from The Mary Tyler Moore Show to Golden Girls to Saturday Night Live!

In this candid take on everything from the unglamorous reality behind red-carpet affairs to her beauty regimen (“I have no idea what color my hair is, and I never intend to find out”), Betty White shares her observations about life, celebrity, and love (for humans and animals). Filled with photos, If You Ask Me is funny, sweet, and straight to the point—just like Betty.

Betty White was an award-winning film and television actress who appeared in such iconic television classics as The Mary Tyler Moore Show and The Golden Girls. In a career that spanned 8 decades, she received seven Emmy awards, three American Comedy Awards, three Screen Actors Guild awards, and a Grammy. Both a pet enthusiast and animal health advocate, White was the president emerita of the Morris Animal Foundation and was a member of the board of directors of the Greater Los Angeles Zoo Association. Often referred to as a national treasure, Betty White passed away in 2021, just a few weeks shy of her 100th birthday.

“A breezy patchwork of musings on aging, acting, poker (she plays a monthly game) and pet ownership.”—The New York Times