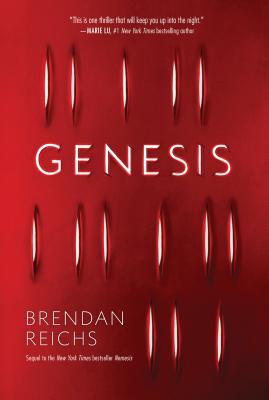 This is book number 2 in the Project Nemesis series.

Noah Livingston knows he is destined to survive.

The 64 members of Fire Lake's sophomore class are trapped in a place where morals have no meaning and zero rules apply. But Noah's deaths have trained him-hardened him-to lead the strongest into the future ... whatever that may be. And at any cost.

In a violent world where brute force passes for leadership, it's tempting to lay back and let everyone else battle it out. But Min's instincts rebel against allowing others to decide who lives and who dies. She's ready to fight for what she believes in. And against whomever might stand in her way.

Brendan Reichs was born and raised in Charlotte, North Carolina, and holds degrees from Wake Forest University and the George Washington University School of Law. After three long years working as a litigation attorney, he abandoned the trade to write full-time. He is the author of the instant New York Times bestseller Nemesis and its sequel, Genesis, and coauthor of the six-volume Virals series. Brendan is also a member of the executive board for both the YALLFEST and YALLWEST literary festivals and has received an MFA in creative writing from the Vermont College of Fine Arts. He lives in Charlotte with his wife, son, daughter, and a herd of animals that tear up everything.

★ "[A] heck of a page-turner . . . Fans of The Hunger Games novels and the CW series The 100 will discover much to enjoy here . . . A cracking good yarn and excellent sequel."—Kirkus Reviews, starred review

"Nemesis was a page-turner, and Genesis has plenty of fevered action and startling surprises, especially as the book nears its conclusion . . . Fans of the first book will certainly want to read this and look forward to the trilogy’s conclusion" —Booklist

"[T]his dark sequel to Nemesis . . . . reads like a technological retelling of Lord of the Flies." —VOYA

"Reichs knows exactly how to mix action, suspense, and characters into a breathless read. This is one thriller that will keep you up into the night.” —Marie Lu, New York Times bestselling author of Warcross

"Equal parts adventure, mystery, and heart, Genesis is a gripping, mind-blowing story that leaves you begging for more. I loved it!” —Danielle Paige, New York Times bestselling author of Dorothy Must Die