The Day the Leader Was Killed (Paperback) 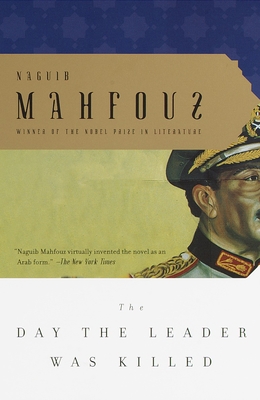 From the Nobel Prize laureate and author of the acclaimed Cairo Trilogy, a beguiling and artfully compact novel set in Sadat's Egypt.

The time is 1981, Anwar al-Sadat is president, and Egypt is lurching into the modern world. Set against this backdrop, The Day the Leader Was Killed relates the tale of a middle-class Cairene family. Rich with irony and infused with political undertones, the story is narrated alternately by the pious and mischievous family patriarch Muhtashimi Zayed, his hapless grandson Elwan, and Elwan's headstrong and beautiful fiancee Randa.  The novel reaches its climax with the assassination of Sadat on October 6, 1981, an event around which the fictional plot is skillfully woven. The Day the Leader Was Killed brings us the essence of Mahfouz's genius and is further proof that he has, in the words of the Nobel citation, "formed an Arabic narrative art that applies to all mankind."

Naguib Mahfouz was born in Cairo in 1911 and began writing when he was seventeen. His nearly forty novels and hundreds of short stories range from re-imaginings of ancient myths to subtle commentaries on contemporary Egyptian politics and culture. Of his many works, most famous is The Cairo Trilogy, consisting of Palace Walk (1956), Palace of Desire (1957), and Sugar Street (1957), which focuses on a Cairo family through three generations, from 1917 until 1952. In 1988, he was the first writer in Arabic to be awarded the Nobel Prize in Literature. He died in August 2006.

"The greatest writer in one of the most widely understood languages in the world, a storyteller of the first order in any idiom." —Vanity Fair

"A Dickens of the Cairo cafes." —Newsweek

"The incredible variety of Naguib Mahfouz's writings continue to dazzle our eyes." —The Washington Post