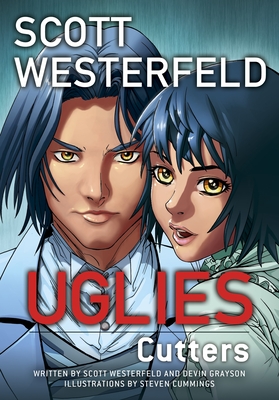 This is book number 2 in the Uglies Graphic Novels series.

Experience the riveting, dystopian Uglies series seen as never before—through the eyes of Shay, Tally Youngblood’s closest and bravest friend, who refuses to take anything about society at face value.

“From the moment we are born, we are considered threats in need of ‘special’ management. We are watched and shaped and exploited by a force most of us never see. . . . All to keep us safe. . . . Do you feel safe?! Or do you feel like you’re in a cage?”—Shay

In Pretties, Tally Youngblood and her daring best friend, Shay, both underwent the operation that turned them from ordinary Uglies into stunning beauties. Now this thrilling new graphic novel reveals Shay’s perspective on living in New Pretty Town . . . and the way she sees it, there’s more to this so-called paradise than meets the eye.

With the endless parties and custom-made clothes, life as a Pretty should be perfect. Yet Shay doesn’t feel quite right. She has little to no memory of her past; it’s as if something in her brain has inexplicably changed. When she reunites with Tally and the Crims—her rebellious group of friends from Uglyville—she begins to recall their last departure to the wild, and the headstrong leader she used to be. And as she remembers the truth about what doomed their escape, Shay decides to fight back—against the status quo, against the mysterious Special Circumstances, even against her own best friend.

Scott Westerfeld’s novels include Evolution’s Darling, a New York Times Notable Book, as well as the Uglies series, the Leviathan trilogy, the Midnighters trilogy, Peeps, The Last Days, and more. Westerfeld was born in Texas and alternates summers between Sydney, Australia, and New York City.

Steven Cummings lives with his family in the magical land known as almost-Tokyo. He has worked for a variety of comic and manga publishers, ranging from Marvel and DC to Tokyopop, on titles including Wolverine: First Class, Elektra, Batman: Legends of the Dark Knight, Deadshot, and Pantheon High. He is also a member of the Canadian art empire known as Udon.

Devin Grayson turned a lifelong obsession with fictional characters into a dynamic writing career. Best known for her work on the Batman titles for DC Comics and the celebrated X-Men: Evolution comic for Marvel, she has written in a number of different media and genres, from comic books and novels to videogame scripts and short essays.